We’re frequently told Brits don’t care a fig-leaf for online privacy. But one London-based startup is about to test that theory — it’s just launched an anonymous search engine, called Oscobo, initially serving up search results specifically for the U.K. market. (Although the intention is to scale the model to other European markets in time too.)

The founders are starting with the U.K. because they reckon Brits do care about not being snooped on online — certainly once they are made aware of how much tracking is being done in the background by dominant search engines like Google. And if offered an easy to use alternative, which is where they’re hoping Oscobo will come in.

Think of it as a DuckDuckGo that serves up U.K.-specific results by default… 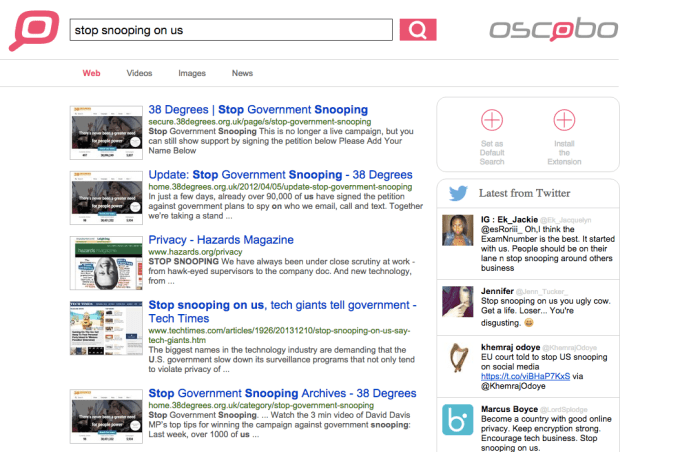 One of the two co-founders, Fred Cornell, used to work at Yahoo, so has seen the evolution of the search and online ad industry up close. “I worked for Yahoo for over 12 years and I really like Yahoo but I saw first hand how the industry tracks users, uses personal data, keeps pushing harder to make even more money from harvesting more of the data,” he tells TechCrunch.

“Search engines, ad exchanges, advertisers, publishers, data traders, everyone’s at it. And I became uncomfortable with the whole scene and decided I wanted to provide an alternative and a better deal for users who are concerned with online privacy.”

More personal data is being collected than is actually needed.

Go back more than a decade and Cornell argues there used to be a fair ‘social contract’ in place between the web user and the online advertisers and publishers. But in recent years he says that balance — i.e. of looking at an ad and getting to view some free content — has become hugely skewed, with far more personal data being harvested than can be justified. (And of course he’s not the only one saying as much.)

“Over the last — particularly the last five, six years, with the rise of ad exchanges and data harvesting — I think that that social contract is in breach… more personal data is being collected than is actually needed and the user has very little say in this,” he says, adding: “People are starting to become concerned about what happens with their personal data, how is it being used and so on.”

He points to huge growth in the privacy search segment, outstripping the overall rate of growth in search (a $62.5 billion global market last year), as another encouraging factor. Last summer, for instance, DuckDuckGo said it had grown 600 per cent over the past two years in the wake of the Snowden revelations about government mass surveillance programs.

Also on the rise in recent years: ad blocking — a technology increasingly associated with the privacy/anti-tracking movement, not just with pure-play ad-blocking. Last year Apple also threw its weight behind the online privacy cause very publicly. And where Cupertino walks others are bound to follow.

“We think that this is right on time to do something like this,” says Cornell.

“We’ve been following DuckDuckGo in the States and we’ve realized that via education they’ve managed to grow the traffic… They have really validated this marketplace,” adds co-founder Rob Perin, who used to work at BlackBerry. “The U.K. marketplace is a very ethical marketplace, I think people do believe very much in their rights.”

Oscobo is licensing its search index from Bing/Yahoo so does not have any semantic search tech of its own. Unlike European rival Hulbee, a Swiss tech company, which last year launched its own pro-privacy consumer search engine in Europe — and raised a bunch of money — another sign of growing interest in non-profiling consumer search.

Licensing its search index from companies that have already spent billions on competing with Google does at least mean Oscobo is sidestepping the problem of trying to compete head on with Google’s tech. On the advertiser side, they also have a deal in place with Yahoo’s ad marketplace — doubtless leveraging Cornell’s industry connections there.

So what’s the business model? How is Oscobo planning to make money if it’s not being evil tracking and data mining its users a la the Google goliath?

Its model is simple paid search, based on bare-bones search data (i.e. whatever string a user is searching for) and their location — given the product is serving the U.K. market this is assumed to be the U.K., but whatever search string they input may further flesh out a more specific location.

“We think it’s a bit of a myth that you need to track users, store IPs and profile them and cookie them to make money for paid search. What the advertiser is paying for is the intent behind someone typing in a keyword… So we still think that there’s a lot of money to be made in paid search without having to keep IPs and profile users and keep track of them wherever they go, offline or online or with mobile phones and so on,” says Perin. “We essentially throw the IP address away straight away, we don’t even log it. We don’t drop any cookies.”

How much money? Oscobo says the privacy segment of the search market was worth about 0.1% in 2014 but reckons it will grow to between 0.5 to 0.7% this year (a projected growth rate of 200% to 300% year-on-year). Which may not sound like much but the overall search market is forecast to be worth $71.8 billion this year so you can see why they’re keen to cut themselves a very small slice of that.

“We’ve got a proven business model. This generates revenue — it’s a very simple model. It’s advertiser driven. So we’re not here to grow the community and milk it later. We should be financially viable from day one,” says Cornell.

“Google have other objectives [than search]. We are forfeiting [user profiling] data to prove a pure and open service where the social contract is you come to our site, the first two links you get will be sponsored ads. If you choose to click on them it’s fair enough there’s an agreement there. If you don’t we don’t look to see where you go afterwards and when you turn on your mobile phone.”

“In terms of targeting there is a very well defined marketplace for U.K. ads for Yahoo and Bing, and that’s for the U.K., the marketplace we tap into, and then we target the keyword,” adds Perin.

The startup is privately funded at this point, including by the co-founders. Depending on how quickly they intend to scale — by launching horizontal pro-privacy products for other European markets — they say they might seek to raise additional funding.

“This year we have a roadmap. We will be rolling out into other countries. We will be providing country-specific search in those countries. For the time being we’re focusing our attention on the U.K., and as it does expand of course we’ll be open to investors,” says Cornell. “Our challenge in Europe different to DuckDuckGo is they have one big market in the U.S. America’s always lucky to have that. We go cross culture. So we’d have to have this conversation in German and Italian and Spanish and whatever.”