It’s an odd feeling to come from California, one of the world’s most prodigious economies where the infrastructure and public systems are simultaneously falling apart in plain view, and arrive in the tiny, landlocked East African country of Rwanda.

The first thing you notice is how exceptionally clean the streets of Kigali appear. That’s because of a ban on non-biodegradable plastic bags. Once a month, most Rwandans are required to participate in community service days called umuganda, when they clean public spaces. Unlike other African capital cities, it’s perfectly safe to walk around alone at night.

But more deeply, Rwanda is one of the most stunning — and fervently debated — turnarounds of the last two decades. Now the 12 million-person country is positioning itself as a Singaporean-like knowledge and technology hub of the African continent.

The thing is, it’s not unreasonable that this plan could work. The country is at the forefront of a broader story of economic growth across Sub-Saharan Africa, which has the potential to repeat the trajectory that pulled hundreds of millions of people out of poverty in both East Asia and Latin America.

The government has built at least 4,500 kilometers of fiber-optic cable to bring broadband access to Rwandans across the country and aims to produce 100 technology companies valued at more than $50 million by 2030 with a new $100 million venture fund.

Earlier this fall, an e-government portal called Irembo opened, allowing Rwandans to apply and pay for driver’s licenses through their mobile phones. (Take that, DMV.) Literally down the road from the Kigali Genocide Memorial is a “Whatsapp” hair salon.

“Africa can no longer be excluded from globalization,” said Paul Kagame, the country’s president at a Kigali technology conference when I popped into the country earlier this fall. “We can develop our human capital and productivity using the same methods that are taken for granted in many other places.”

This is a world apart from a little more than 20 years ago. In 1994, the country was pulled apart by a genocide that left close to 1 million people dead in 100 days. It was the eruption of a long-simmering ethnic conflict seeded in the Belgian colonial era.

In the aftermath, Rwanda only opened its first computer science program in 1998 with a single lab where the university department had to fly in South Africans to teach locals how to maintain and operate PCs.

“We had this challenging moment in our history — the genocide,” said Clement Uwajeneza, whose company Rwanda Online is building the e-government portal Irembo. “After that, we had what I call a liberation period. We had to go through this reconciliation and healing process. In this period, we already this spirit of going beyond ourselves — to act not in revenge and not to maintain this social and ethnic unrest. People had to go beyond themselves. In that, the new Rwanda started to take shape.” 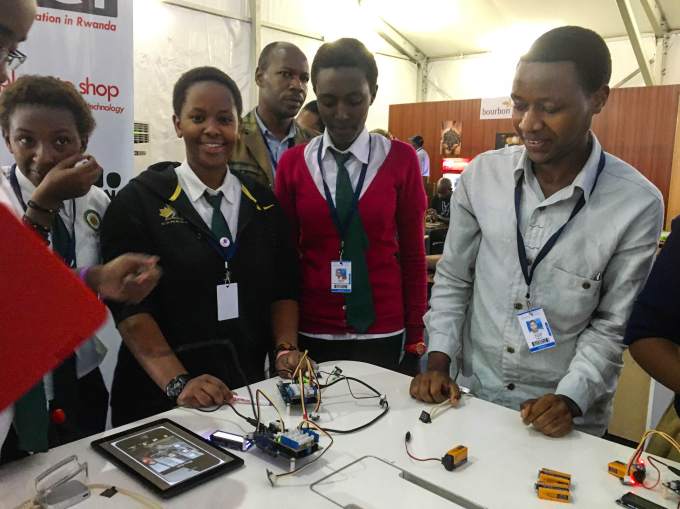 Students from the Gashora Girls Academy, show off an Arduino Breathalyzer test and a mobile app called SheSafe, that lets women share their locations with trusted friends and family to make sure they get home safely.

When I was there a month and a half ago, I met a dozen teenage girls from the Gashora Girls Academy and another school, Lycee de Kigali. One group had built an Arduino-based Breathalyzer test. Another had created an app called SheSafe for women to share their location as they walk home at night and another group had made a piece of hardware called Touch of Life to track bus boardings to improve local transit systems.

“When you apply what you learn, you know you can make something that is going to impact our society,” said Ariane Kangabo, an 18-year-old who had worked on the app to for women to get home safely.

Women hold a special place in post-1994 Rwanda. They make up close to two-thirds of the country’s parliament, as the country’s Constitution mandates that women make up at least 30 percent of position in governmental decision bodies. The country’s ICT and Youth ministry is also studying how to close gaps in rural broadband access between men and women.

“Women are change agents in the family. Our challenge is to get more of them digitized, enabling access to mobile money,” said Cynthia Gordon, who oversees the African markets for Millicom, which runs the mobile service provider Tigo.

Taking a cue from neighboring Kenya and its well-known iHub in Nairobi, Rwanda’s ministry of youth and information technology opened a co-working and accelerator space called kLab in the capital. Even though the country’s budget is still 30 to 40 percent dependent on aid, there is an almost spiritual zeal for the virtue of private capital.

The country has its own version of “Shark Tank” called “Face The Gorillas.” At one taping this fall, two Rwandan hackers, Patrick Muhire and Ceddy Muhoza, pitched VugaPay, a mobile money app that is inter-operable between all of the carriers. They immediately received and agreed to an investment on the spot.

“We are the lucky generation. Our parents suffered a lot, but they gave us the strength to never look behind again,” said Jean Niyotwagira who founded Torque, a SAAS platform for managing last-mile distribution of goods like Heineken beer or soft drinks in far-reaching areas across the country. “The Rwandan people know what it means to have everything you worked for destroyed and to start from zero.”

Niyotwagira first used the Internet in 2000, when his dad brought home an old MS-DOS computer. It had a command line interface, but they had a few books at home.

“QBasic was my first programming language,” he grinned. “I loved it very much.”

Some entrepreneurs are returning from years abroad in the West. Louis-Antoine Muhire remembers hiding in a car while trying to flee the country as a child. He had facial features that would be perceived as Hutu, while he says his brother looked more Tutsi. While there were more than a dozen clans prior to colonialism, a strong sense of ethnic difference did not really become amplified until the Belgian regime began issuing identity cards in the 1930s that separated Rwandans into Hutus and a ruling Tutsi class, sowing the roots of a rivalry for power and resources that has torn the country apart in multiple conflicts throughout the 20th century.

“When I left, it was hell on earth. I was so traumatized that I didn’t want anything to do with Rwanda,” Muhire said. “But after years in Canada, I was asking myself. Which country do I really belong to? Do I belong to Canada? Do I belong to Rwanda?”

He came back for the first time a year ago, “I was shocked to see how the city had changed.” Muhire moved back to Africa, and started Mergims, a remittances platform that lets the Rwanda diaspora directly pay bills for family back home. The startup is onto an idea that other remittances companies like YC-backed and Latin America-focused Regalii are addressing in switching to direct payment of utility or school bills from pure cash transfers. They call it “productized remittances.”

It’s important to note that this nascent privately-run tech scene is mirrored by loads of government support and investment. It’s essentially an African version of the soft authoritarian approach to governance pioneered by Lee Kuan Yew in Singapore, and copied later by mainland China. (Kagame occasionally drops tweets about his meetings with Singaporean ministers.)

Every five years, the country hashes out a nationwide information technologies plan. From 2000 to 2005, it focused on basic infrastructure. From 2005 to 2010, it was advanced infrastructure and last-mile connectivity. In this cycle, it’s about promoting applications and entrepreneurship on the back of this broadband and 4G connectivity.

“We do want to see the private sector taking a leading role. But the government is in the business of providing an environment for the private sector to flourish,” said ICT Minister Jean Philbert Nsengimana, who happened to be one of the country’s first computer science students more than 15 years ago. “That often requires government to intervene — for instance, to push access where the private sector is not going for the greater benefit of citizens. By their nature, corporations tend to maximize their profit and some of the time, that may not be to the greater benefit of everyone. The mechanisms that make sure that everyone benefits have to be put in place by the government.”

The rush to be a technology hub on the African continent stems from the reality that Rwanda lacks the resources and commodities that other neighboring countries do. Unlike bigger tech hubs on the continent in Lagos, Nigeria and Nairobi, Kenya, Rwanda is a tiny, landlocked country with just 12 million people.

“We have a lot of similarities with Singapore, South Korea or Israel. We don’t have the natural resources that you see from other African countries like Nigeria,” said Antoine Sebera, who came out of the country’s first undergraduate class of computer science students in the early 2000s and is now the chief human resources officer for Olleh, a mobile carrier. “Our biggest wealth is in our people. We’re in a competitive world now. It’s about how you outsmart others or find a niche where you excel. Everyone is a knowledge worker now.”

The tightly government-controlled approached to ruling has invariably raised concerns about human rights and democratic participation.

This week, the country will host a referendum on a revised constitution that will pave the way for Kagame to run for a third term after 15 years in power. Six ambassadors from the U.K., France, the Netherlands, Belgium, Germany and Sweden signed a statement raising concerns about Kagame’s human rights record last week.

While internally the country is secure, there have been questions about the government’s incursions into the Eastern part of the Democratic Republic of Congo and whether internal political dissent is stifled.

It poses challenges for U.S. foreign relations; the Obama administration has been more hesitant while Hillary Clinton and former president Bill Clinton have been involved in supporting Kagame’s efforts for years through the Clinton Global Initiative. There is a sense of guilt on their part for not having intervened when the genocide was taking place.

Earlier this month, the U.S.’s ambassador to the United Nations Samantha Power, who wrote a book on the legal and justice implications of genocide in a “A Problem From Hell,” urged Kagame to step down at the end of his term and make way for a peaceful transition to a new generation of leaders.

“Nobody is indispensable,” Power reiterated. “We expect President Kagame to step down at the end of his term in 2017.”

It’s worth mentioning that, unlike other African nation-states with more arbitrarily created borders, Rwanda has had a long history of centralized power and organized rule that pre-dates the colonial era.

And yet, to outside observers from the West, Rwanda’s political process is as unnerving as the country’s economic and technological progress is awe-inspiring and phenomenal.