Vanitee, a six-month-old Singapore-based startup that provides a marketplace to connect beauty practitioners with customers, has raised $3.5 million as it prepares to expand its service across Asia.

The round was raised across in two lumps. Initially, Southeast Asia-based beauty seller Luxasia and Robert Yap, head of logistics firm YCH, agreed to investment around $1.4 million, but subsequent contributors led by from serial investor Ivan Lee and Japanese beauty portal @cosme raised the round. Interestingly, a filing with Singapore’s ACRA shows that Garena — a billion dollar tech firm covering payments, games and e-commerce — also partook in Vanitee’s round.

Vanitee’s origins come from the beauty box scene. Back in early 2012, Douglas Gan — a Singaporean entrepreneur behind ShowNearby, bought by Yellow Pages back in 2010, and other projects — was a co-founder who started Vanity Trove, a service that let users receive a monthly pack of beauty products for a fixed fee. The company subsequently hoovered up a cluster of rivals — including Rocket Internet-backed Glossybox Taiwan — in a six deal acquisition spree.

As hype around the beauty box scene died down in Asia, Vanity Trove tried to go digital with the launch last year of a social network aimed at helping women discuss their favorite products and connect online. Gan said that while takeup from users was positive, he and his founding team were unable to gain investor interest. Going back to the drawing board, they made adjustments to turn Vanity Trove into a profitable business and set about thinking up their next move. 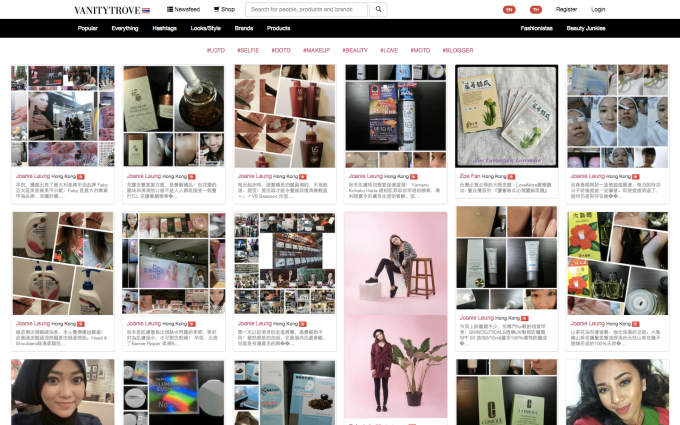 That turned out to be a new business: Vanitee — an idea cooked up at PayPal’s ‘Battle Hack’ event in Singapore in September 2014. After finishing third at the hackathon, the team took time out to talk to Vanity Trove partners, suppliers, users and really anyone with an interest in beauty products, and took the concept forward.

The idea of a service is to facilitate direct connections between the beauty industry and consumers, much like Airbnb. (Airbnb is a major influence, right down to the design of Vanitee’s website, it seems.) That means that beauty consultants can get a little extra business beyond their work at a salon, or go independent if they prefer. But, beyond just helping the professionals get clients and bookings, disintermediating salons gives potential customers a professional experience  — be it a nail manicure, makeup, hair, or more — at a cheaper price than they’d otherwise pay. Added bonus: the professional can come to you.

It is still early days for Vanitee, which officially launched in Singapore in May of this year. Gan told TechCrunch that the website and mobile apps have served nearly 5,000 customers so far with over 550 independent beauty professionals offering services through the platform. (More than 1,000 more are going through the company’s “stringent” verification process right now, according to Vanitee.) 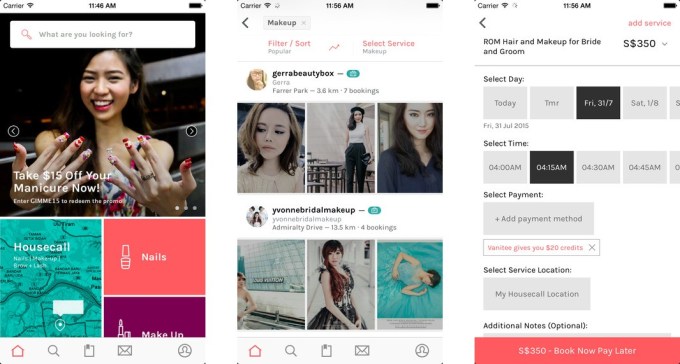 Already, though, Vanitee is looking at a regional play. It has plans to launch its service in Malaysia in the first quarter of 2016, and it is also eying East Asia. With @cosme on board as an investor, there’s a clear path to expanding into Japan, while Vanitee has taken a step towards launching in Korea by acquiring the team behind Blucarrott, a Seoul-based company that provides a similar service.

Blucarrott’s 10-person team will relocate to Singapore in January to integrate into Vanitee and the company’s culture. The longer term plan, Gan said, is to move them back to Seoul to launch Vanitee Korea before the end of 2016.

Beyond Japan and Korea, which represent two of the world’s most lucrative markets for beauty products and services, Gan said that Hong Kong and Taiwan — two countries he is familiar with from Vanity Trove — are other potential expansions over time. With investors like Garena and Luxasia in its stable, Vanitee will be able to call on regional experience and expertise across Southeast Asia, too.

Indeed, learning from existing businesses and those who run them is exactly why Vanitee didn’t raise from VC firms, Gan explained.

“Southeast Asia os a very different landscape for investors versus the U.S.,” he told TechCrunch in an interview. “There’s a lot of synergy raising from corporates rather than VCs. We were evaluating whether to bring a VC, but we found Luxasia added a lot more value. As for @cosme, we [hope to] learn from them, and what makes them sustain.”

Beyond geographical development, Vanitee is working to add more features to its service. An in-service CRM tool for professionals are among the new additions coming soon.

Southeast Asia has definitely seen a growth in on-demand services, as GrabTaxi and Uber have become increasingly mainstream and Airbnb more popular, and it remains to be seen exactly which of these cluster of startups will sink or swim over the long-term. Vanitee is at the point where it is aiming to scale into new markets, so it’s tough to judge its feasibility right now, but it is shaping up to be the primary player that tests the sustainability of this business model for beauty services.