It’s well known that most startups fail, so when the company you founded reaches scale and begins to grow into a big name, founders tend to strap in and get ready for the fruits of their labor.

That’s not always the case though.

Mitchell Harper was founder and co-CEO of Bigcommerce, an e-commerce platform that has raised over $120 million from VCs including SoftBank. Harper left Bigcommerce in February and, while he remains an active board member, he decided to take the leap and work on new projects. Australian Harper launched ‘startup studio’ Capital H Labs in October, and his first new company is PeopleSpark, a startup that he believes can improve communication between those running companies and their employees through better quality performance reviews.

“The idea came from Bigcommerce,” Harper told TechCrunch in an interview. “The biggest problem was scaling the culture to keep up with the head count. It’s hard to build a culture based on employee feedback… most tools work on quarterly or annual rhythm but i knew that was too long.”

Nine months in the making, PeopleSpark is a response to that problem. It is a tool that collects feedback and fosters communicate between managers and their staff, with a focus on mobile and a definite avoidance of marketing speak.

The idea is simple, communication should be regular — every week — and performance review tools should focus on engagement. The idea is to give a ‘weekly pulse’ on each team, what each member is working on, stuck on and how they are feeling.

“[Traditional performance review services] build software for a manager first and employee second, which shows in their engagement,” Harper said. “They were one of the primary reasons we lost good people at Bigcommerce, because we didn’t have a chance to really listen to them. So we tried to design the product so it is stupidly simple and without HR speak.”

PeopleSpark went live three weeks ago and already, Harper said, it is being used by “a few hundred” companies in the US and Australia — primarily early stage startups and agencies “the places where employee turnover is high.”

While it is still early days, Harper claimed that the service has a 98 percent participation rate from employees, with 70 percent responding via the mobile app. That’s potentially game-changing information about not only how productive teams are, but how happy and motivated staff are. 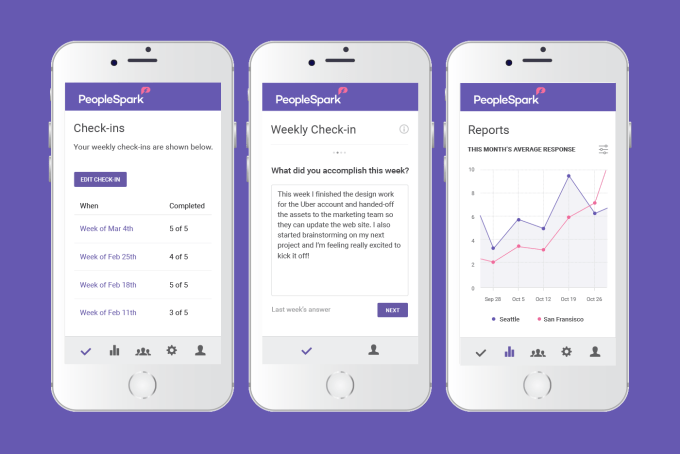 PeopleSpark’s team is spread across an office in Palo Alto and another location in Sydney, with Harper also spending a sizable chunk of his time at Bigcommerce’s office in Austin, Texas. Such is his belief in the project, Harper said he has invested an undisclosed sum to lead the company’s $1 million seed round.

“I had initially planned to raise a seed round from external investors, but after seeing the traction during our preview release and hearing the impact PeopleSpark was having at those companies, I decided to go ‘all in’ and lead our seed round. I believe in the product and wanted to put my money where my mouth is,” he said in a statement.

As well as hiring staff and seeking out new clients, Harper said that the company is planning to launch an API next year and connect PeopleSpark to popular services like Slack which can increase engagement and participation.

“We’re building out from being a product into a platform,” he told TechCrunch. “This whole culture of quarterly reviews needs to be disrupted. Talk to anyone — founder or employee — and they hate it.”