Food discovery service Burpple is savoring the taste of cash today after the Singapore-based company landed a $6 million Series A round from Tembusu Partners, Singapore Press Holdings’ Media Fund and Triumph Capital.

Long-time TechCrunch readers may remember the service launching in 2012 as a photo-sharing app for foodies with some discovery elements baked in. But Burpple, which has taken in $750,000 in investor money to date, has undergone quite the transition over the past three years. Today, the service is a food discovery platform for Singapore and Kuala Lumpur, Malaysia, that is akin to Yelp or Zomato, but users are encouraged to take and upload photos of their dishes.

“In 2014 we evolved the model to focus on local discovery and really go deep into F&B and hospitality space,” Burpple co-founder and CEO Dixon Chan told TechCrunch in an interview. “Lots lots of users are loving it, it’s more than just food journal.”

On that note, Chan said that its apps, web and mobile services have been used by four million people this year across more than 100 countries. Burpple’s discovery features are only active in Singapore and Malaysia, but any user worldwide can curate local places of interest and make food lists for cities. One use for the new money, Chan explained, will be to identify “food capitals” in Asia of high user activity where Burpple can introduce expand localized recommendation guides and editorial programs. 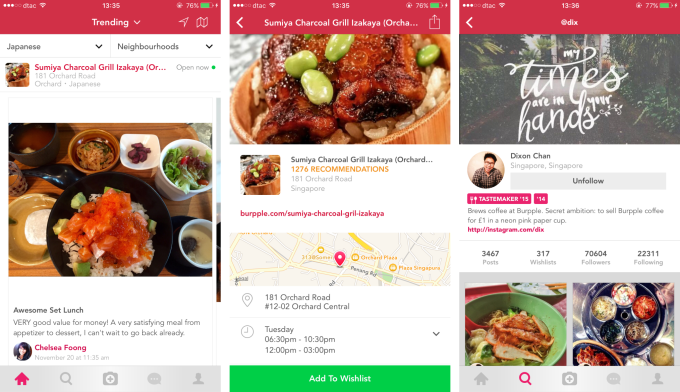 In Singapore and Kuala Lumpur where these guides are already active, the company wants to increase its presence among restaurant owners and establishments. The company launched a ‘Business’ offering earlier this year, which allows restaurants owners to claim their Burpple page, check traffic analytics and more. Chan shared that, while basic features will remain free, Burpple wants to bring more services into its business offering. While reluctant to be drawn on future plans, things like table bookings, table management and payments are all possible, he said.

Burpple is up against plenty of competition, particularly in its native Singapore, in the form of Singtel-owned HungryGoWhere, and Hong Kong — a potential expansion — where OpenRice leads the space. Chan said he believes that Burpple’s community-led approach to recommendations — led by hand-selected ‘Tastemakers’ among its userbase and in-house editors — help it stand out by offering genuinely curated suggestions. Likewise, he said, the company is doubling its five-person data science team to help surface trending and hot recommendations from inside the service and its community more efficiently.

It’s been three years since Burpple raised an initial $500,000 seed and, while it was subsequently extended by a further $250,000, Chan said that increased income through partnership deals — he claimed revenue grew 10x in 2014 over 2013, but didn’t give specific figures — and a lean team of just 15 allowed that relatively small sum of money to last so long.