500px, the photography platform where users post and share, as well as buy and sell photos, has become the latest Western technology company to enter China. The Toronto-based startup launched a localized version of its service in China — 500px.me — this week, following an initial trial period.

This isn’t the first time that 500px — which is backed by Andreessen Horowitz among others, and rivals Flickr, Getty, Shutterstock and up-and-coming companies like Germany’s EyeEm — has entered the Middle Kingdom, but this time it will be hoping the launch is smoother.

Back in October, it announced the 500px.me site but faced an immediate blacklash from its community of six million users, which was unhappy that international users’ photos would appear on the China site by default with no option to opt out. 500px subsequently pulled the site following the feedback, and relaunched it as a beta that only included users who expressly provided their consent.

“We learned a lot in terms of the community and how proactive we need to be,” Andy Yang, 500px CEO admitted to TechCrunch in an interview. “We’re getting much better at how we communicate with our community.”

Fast forward to today, and 500px.me is fully launched in China. It’s a two-sided content approach that is headlined by work from 50 high-profile photographers selected from across the world and, on the other side, a community-led platform for amateur, hobbyist and professional photographers in China to showcase their work.

“500px.me is much more like how we first started,” Yang said. “Invite only and exclusive.”

Photos uploaded to the Chinese 500px.me site will automatically be loaded to the global 500px.com site, but content from 500px.com will only be mirrored on 500px.me if the photo owner wishes.

Unlike the main 500px site, the China service is run as a joint venture with Visual China Group (VCG), a Getty-like service with 15,000 licensing customers which led 500px’s $13 million Series B round which closed this summer. VCG will manage image licensing, regulatory issues and other areas, including any censorship demands. 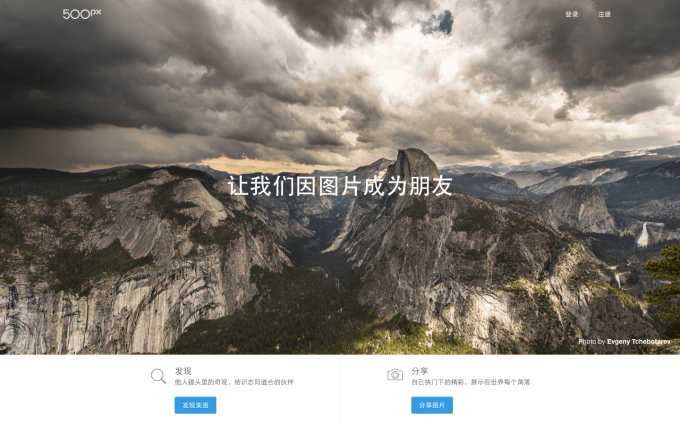 Yang admitted that the company could have gone into China on its own, but a couple of reasons made a partnership the best solution, he said.

“Our website and mobile app performance isn’t great in China,” he explained. “We needed to improve it and have local expertise and marketing to grow our community. All different countries have their own cultures, laws and ways to excite communities, so it really helps — specifically for China — to get a local partner who is known for visual creativity.”

China’s approach to censorship has stiffened in recent years, with crackdowns on social networks, messaging apps, censorship-evading VPNs and, even, music streaming services. Images are an evocative way to communicate with audiences, will 500px.me also be subject to freedom of speech regulations in China?

Yang said that, initially at least, users in China will have the freedom to upload what they like. The service does check some of its content to ensure it is licensable, and not pirated, but it relies on its active community to report inappropriate images. That policy will continue in China, albeit with VCG managing the site.

“Our intention is for a fully synced site (with the main 500px service), but we must be respectful of culture and also encourage creativity. We will evolve and see how it goes,” Yang added.

LinkedIn, Uber and Evernote are among the U.S.technology firms that have made business concessions to enter China and, in return, realized lucrative financial returns. 500px, Yang said, is initially focused on developing a community of photography enthusiasts in China, but he did admit that there is plenty of demand and potential for licensable images.

“North America is still our biggest market. We don’t really have projections in terms of how big the [Chinese] market is. We know it is huge, there are hundreds of millions of middle class households with creative pursuits. [Globally there’s a] real thirst for localized content, travel is one of our strongest segments,” he said.

With that in mind, 500px is planning a series of other “initiatives” across Asia as it looks to grow its community and increase its library of licensed images across the continent.

The 500px.me website is open now in China, with a corresponding iOS app set to launch in the coming days.