Dropbox CEO Drew Houston and his lieutenants took the stage today to give their big enterprise pitch to customers. Houston, of course, has to answer questions that a lot of critics have for the company. Can it be a force in the enterprise? Is it worth $10 billion? Will it hold that valuation as online storage becomes a commodity and the cost of storage goes to zero?

Dropbox sought to answer some of those questions at its first customer conference, Dropbox Open, in San Francisco today. It was focused on new enterprise tools — which, as the company increasingly has to shift its business model from simply charging for storage, are going to be tools that will help it build a bigger business. Houston said the company had hit 150,000 paying customers, 50,000 of which it added in the past 10 months, and unveiled a suite of new tools to make that justification as well.

“Because we’ve been heads down for most of the year, and we don’t talk about ourselves that much, there’s been these misconceptions, oh we’re just for consumers, we’re playing catchup, we’re not serious about business,” Houston told me. “I think we’re like, hey, we don’t want to dwell on this, but just so you know this is the scoreboard, and the rate of growth and adoption is really big right now.”

And the biggest tool the company unveiled was an enterprise tool set called Dropbox Enterprise, which includes some additional tools above its Dropbox business product. It’s essentially giving IT managers more tools to onboard employees to a corporate Dropbox account and have visibility into their collaboration processes, and also gives those managers a dedicated customer service representative.

There were other elements that came from today’s event: It’s partnered with Symantec for loss prevention; Dropbox is adding shared folders and shared links to their development API. It’s also launching a partner network with more training and support, and help them market their tools to customers.

This is all a lot of very in-the-weeds enterprise technology, but it’s important for the company’s business. It has to differentiate itself from other services like Box, with cloud storage becoming increasingly commoditized. 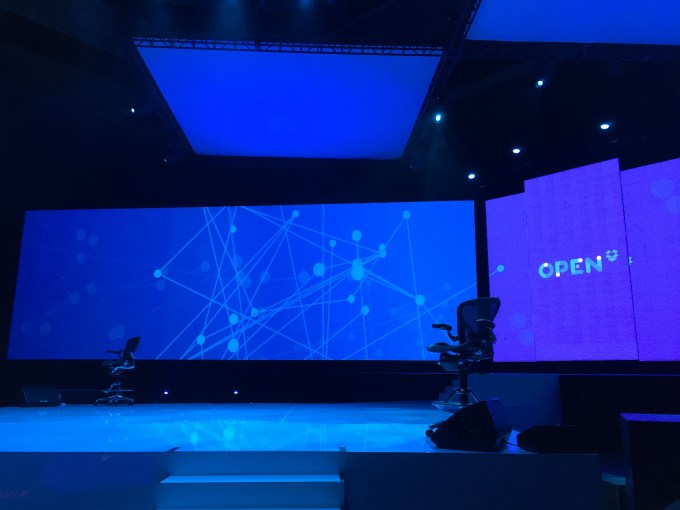 The competition is very much heating up in this space. Both Box and Dropbox have to basically sell their services not as a bucket of storage, but as a set of powerful collaboration tools that sit on top of that service. This is essentially something that Dropbox is still young at in the business world, but COO Dennis Woodside said that the opportunity spans hundreds of billions of dollars and that Dropbox — and the rest of the companies in the industry — are still in the very early stages.

“It’s easy in the Bay Area, to think, we all know a lot more about what the business is than lots of people,” Woodside said in an interview. “But literally every business in the world, we believe, will migrate to a cloud-based solution. They’re gonna continue to have large files, they’re gonna continue to collaborate around those files. Every person around the world will have some sort of cloud service that they’ll also use for collaboration.”

To be sure, Box has been in the business of capturing enterprise clients like Coca-Cola, IBM and General Electric, which the company says have deployed Box to as many as hundreds of thousands of employees, for much longer than Dropbox. While Dropbox talks about the number of businesses that have signed up as paying customers, there’s a little bit of ambiguity in terms of the number of customers for each of those businesses.

Any time you ever want to see what Dropbox will do next, look for what we did 3-5 years ago.

There’s plenty of high-level talk here for Dropbox, but it all still comes down to execution. Dropbox is still using its ground-up model, but the company is also increasingly working with partners to help distribute the service, Woodside said.

“That’s one of the reasons for the new tier and the event,” he said. “The organic adoption’s always been great, but our customers go through other channels to buy their software, or have more complex environments. And that higher touch is really helpful that’s something they get from other vendors.”

So, one last question that critics of the company frequently ask: Is Dropbox worth $10 billion? Houston wouldn’t comment on the valuation, but he certainly had an argument for why his company was so valuable.

“What are the recipes for building a great company. You want to have things like, build products people love, have a beloved brand known around the world, a really powerful business model. We’re super early in this huge market,” Houston said. “We combine the consumer Internet piece with all the great things about SaaS business, the monetization, subscription revenue, sticky customers, I just can’t think of examples of too many companies that have a model like that.”