Slack just unveiled a new way for app developers to create slash commands, letting users interface with their apps from within Slack channels.

After being turned on via the “Add to Slack button“, these commands will allow users to do things like call a Lyft or ask FourSquare for lunch recommendations, all from within a channel or private message.

For example, a user could type “/lyft eta” followed by an address to not only get an estimated ETA and cost, but also actually order a car to your location.

Foursquare is another app that will work with Slack commands at launch, letting users query the app for meal recommendations and more. Typing “/foursquare sports bar” or “/foursquare dinner” followed by an address will automatically pull in a list of suggested restaurants for everyone in the channel to see. 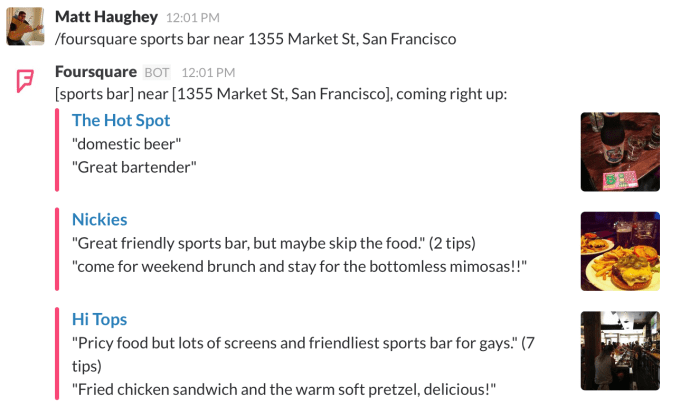 Other partners at launch will include Dribble, Poncho, Blockspring, and more. Additionally, any developer will be able to create commands via Slack’s API.

Interestingly, the company has added a bunch of functionality for developers including the ability to respond publicly to commands “so everyone in a channel can see the response”, and let an app respond up to five times after an initial command. This will be useful for companies like Lyft, that can automatically send a second or third message when the car is actually arriving.

Slack is also giving developers more control over how their commands look.

The new API will let them change the icon, name, and formatting of the responses, so they can look and feel like an extension of the product and service, and less like a traditional slack command.

This is a strong move to further bring outside apps inside Slack, letting the platform be the ultimate communication layer for the enterprise. The same way Facebook and Twitter entrenched themselves on the Internet with Like and Follow buttons, Slack’s platform plays insulate it from disruption.

The more you can do from in Slack, the more partnerships it strikes, the more difficult it will be for a competitor to copy it or a user to disentangle themselves.