When 27-year-old Ruth Mesfun started working at Excellence Girls Middle Academy in Brooklyn two years ago, there was no computer science program at the all-girls school, which is 92% African-American, 7% Latina and 1% Asian. At the time, she was a science teacher, but felt that it was really important for these young girls to have an opportunity to learn how to code. So, Mesfun approached the school’s principal about offering computer science classes. The principal was receptive to the idea, but the school still needed a curriculum and someone to teach the class. Mesfun offered to do that and more.

“I thought that they needed to learn about computer science,” Mesfun told me over the phone, after a full day teaching sixth graders. “When they’re 12 years old, they’ve already determined in their minds if they’re good at math or science. When they go into high school where CS is an elective, they already eliminate themselves if they think they’re not good enough.”

Given that Mesfun had limited experience with teaching computer science at the time, she applied for and was selected to participate in the Computer Science Educator Fellowship at the Flatiron School. During the fellowship, Mesfun learned how to teach programming to high school students, as well HTML5, CSS3, JavaScript, Ruby and Swift.

“I’ve always loved coding, but the atmosphere of [the Flatiron School] was phenomenal,” she said. “I got really excited to create a CompSci class.”

Now, Mesfun is piloting Excellence Girls Middle Academy’s first-ever computer science curriculum, which she created. Through her experience teaching computer programming to students, she realized a need for a resource that highlights the achievements of people of color in tech and startup industries.

“When I spoke to my students about what their image of a web engineer or software developer is, they thought that if they’re black and in the tech industry, they’re geniuses and they must’ve been coding since they were eight,” Mesfun said. “This is completely warped and this is not to their advantage for them to think that way.”

Enter People Of Color In Tech. 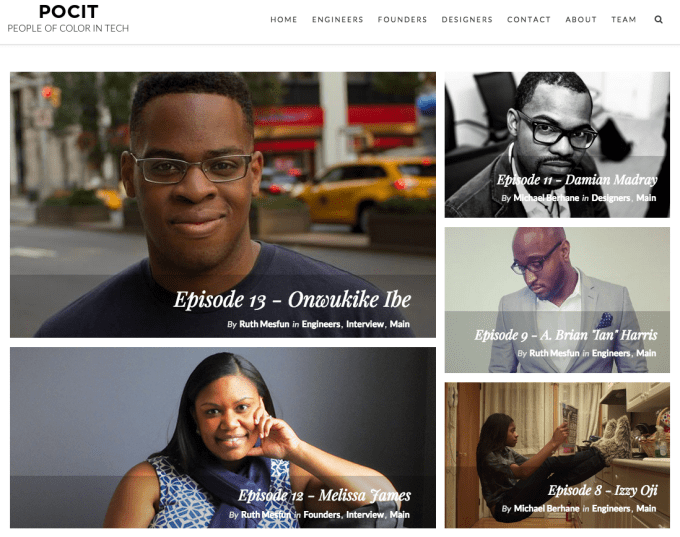 Mesfun teamed up with her London-based developer friend Michael Berhane, who also felt passionately about promoting people of color in tech. The goal was to launch the site and first interview by the end of August, and they succeeded. There are currently 13 interviews with engineers, founders and designers featured on the site. The goal is to continue highlighting two people of color every week. The most recent episode features Onwukike Ibe, a software engineer at Uber. Here’s a snippet:

One thing that I have to admit is disheartening is that you don’t see many engineers around you that look like you, or share the same culture as you.  On one hand I feel that this doesn’t matter because its been relatively easy for co-workers to become good friends, and to find good mentorship.  However I often wonder if this subconsciously impacts peoples perceptions of you.  It is possible that you didn’t get a promotion, or don’t get hired because of race.  However you cannot objectively prove these things, and while they may be true it doesn’t empower you to think that a situation doesn’t go your way because of race.  Ultimately I like to acknowledge that I am an African American in tech, but I don’t want to let that influence everything about how I see myself as an engineer.  I encourage other minorities to do what they can to help diversity, whether its getting more people into the pipeline by teaching others to program, or promoting awareness of diversity through social media, however I firmly believe in proceeding almost as if race doesn’t exist, and trying to look at things as objectively as possible.

Now that the site has launched, Mesfun gives her students the interviews to read as homework, and encourages them to write letters to the interviewees. But the main goal of the site is to help people of color realize that, even though the numbers are low, there are “so many of us who want to support each other,” Mesfun said. Down the road, POCiT will host chats on Twitter and other social media platforms to let the readers engage with the interviewees, as well as host meet-ups to further grow and nurture the community of people of color in tech.