Twitter’s been playing around with polls for the past month or so…right out in the open. Today’s announcement shouldn’t come as a surprise if you follow anyone who works for the company or runs in tech’s inner circles. Over the next few days, everyone will be able to pepper you with yes/no, two-option polls. Why only two options? Not sure, but it’s something that’ll probably expand over time.

I’m not a fan, but hey, what do I know. I just feel like it limits interaction, but as we know, Twitter needs a few spurts of growth, and lighter engagement points will help for those who are slowly being enticed into joining or rejoining.

The nice part about Twitter Polls is that you’re not being tracked when you vote, meaning your participation isn’t made public to anyone and I’m told that the data isn’t being shared with marketing firms or brands. I would be really hesitant to respond to a “Coke or Pepsi” poll, for fear that I’d get spammed or targeted by either company.

That’s not to say that brands aren’t going to use the crap out of this, because they are. It’ll also be used quite a bit by news outlets, especially with the upcoming presidential elections.

If today was Election Day & these were the only two candidates who would win? @HillaryClinton @realDonaldTrump 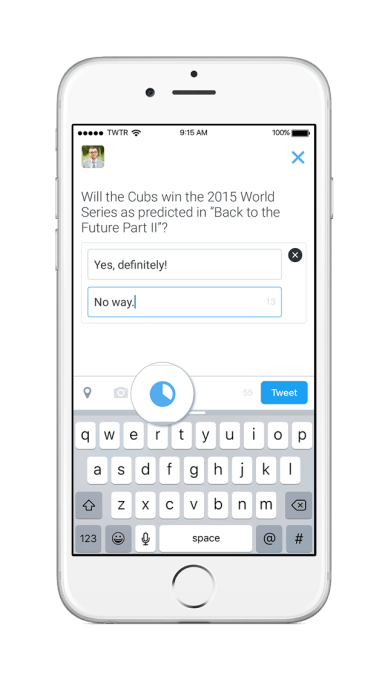 Here’s what Todd Sherman, product manager on Polls, had to say:

Previously, we’ve offered a few ways to participate in polls — Tweeting questions and tracking replies, tallying hashtag votes, or asking followers to favorite or Retweet to vote. Now, you’ll be able to create your own two-choice poll right from the compose box and it will remain live for 24 hours. You can vote on any poll, and how you voted is not shared publicly. When the poll closes, we’ll send a push notification to everyone who participated to check out the final results.

Notice the bit about push notifications. Yes, this is another way to bring you back to the app. I’m not saying it’s a bad idea, but it makes me not want to participate in a bunch of polls. Even though the ending times will be scattered over 24 hours, if you participate in a slew of them, you’re going to wish you didn’t. Turning notifications off is never the answer, it’ll be interesting to see if Twitter batches them.

Regardless of whether this is limiting for the art of conversation on the platform, it’s nice to see Twitter shipping things rapidly. At the beginning of the month, the company launched its much-referred-to Project Lightning aka Twitter Moments. No word on how that’s been going over, so perhaps we’ll hear more at today’s Twitter Flight conference about it.

I use Moments quite a bit, especially when I haven’t been on Twitter for a few hours. Which happens once in a while. Shocking, I know.

Twitter Polls are rolling out over the next few days for iOS, Android and desktop web and will show itself as an icon in the Twitter compose box, which means that the company is all in on the feature…because space is limited here.