Alibaba, the New York Stock Exchange-listed Chinese e-commerce giant, is getting into video in a major way, after it announced plans to buy out Youku Tudou, one of China’s top YouTube-like services, in an all cash deal. Alibaba previously spent $1.22 billion on an 18.3 percent stake in the video firm, which claims to serve 580 million users each month.

Youku’s market cap is $3.8 billion, and Alibaba intends to pay US$26.60 per share — a decent markup on the most recent closing share price of $20.43. Thus, the deal values Youku at around $5.1 billion. Alibaba confirmed on an analyst call that, taking into account the cash on Youku’s books, its total offering is worth around $3.5 billion.

If the acquisition is a success, Alibaba intends to take Youku private, according to a filing. Youku chairman and CEO Victor Koo will remain at the helm of the company.

To be clear, Alibaba is offering to buy the company and, while Koo and other founding shareholders have given their blessing to the proposed deal, it is still subject to shareholder approval.

Alibaba is intending to take full ownership of the company — which was created when rivals Youku and Tudou merged in 2012 — to supercharge its focus on digital entertainment.

Alibaba is best known for its e-commerce services — which include its Taobao marketplace and T-Mall site for brands — but it has also made big plays in content as part of a bid to be more present in Chinese Internet’s users’ daily lives. Aside from its investment in Youku, Alibaba owns a stake in microblogging site Sina Weibo (via a $586 million investment) and it has a burgeoning business in content creation, including Wasu Media (a company backed by Alibaba founder Jack Ma), and Alibaba Pictures, a movie content firm. 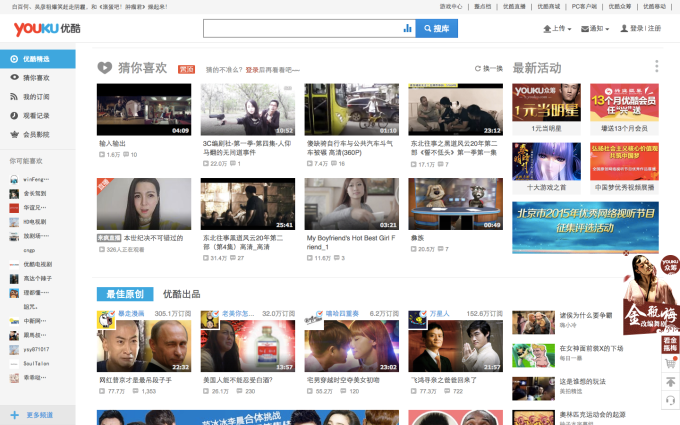 More tangible evidence of Alibaba’s media ambition can be found in Tmall Box Office, a Netflix-like service that it recently launched in China, and its move into the living room with smart TVs and set-top boxes. These devices, which are made by third-party manufacturers, run on Alibaba’s own operating system and include a suite of its products — allowing device owners to shop, pay bills, and more right from their big screen.

Clearly, there are further synergies for Youku and Alibaba said it plans to use its e-commerce, media and advertising platforms to “significantly accelerate” Youku’s growth.

That’s important because, to date, the company has struggled financially despite its huge and very active userbase. Youku and Tudou merged their businesses to save on common costs and expenses, but the financial good times haven’t exactly rolled in. Revenue in Q2 2015 grew 57 percent year-on-year to reach $259.6 million, but the company posted a net loss of $55.2 million for the three-month period.

Youku isn’t alone in battling it out for the attention of Chinese Internet users, either. Baidu’s iQiyi, Sohu and Tencent all compete in the video space, with Baidu and Tencent able to lean on their search engine and mobile messaging empires, respectively, to pull in viewers. Recent research suggested that there’s little to separate Youku and iQiyi (Tudou remains a separate site to Youku) as the largest video platforms in China.

Challenges aside, Youku is getting close to seeing half of advertising revenue come from mobile, but it looks like it might find a better fit as a private subsidiary of Alibaba, rather than a public listing, independent business. Well, that’s what going to happen anyway.