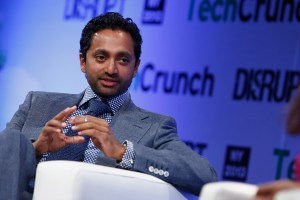 Chamath Palihapitiya, the opinionated venture capitalist who once got into a public spat with Ron Conway over income inequality and challenged founders to have the “courage to move to Oakland” a few weeks ago, has catalogued detailed racial and gender diversity data on venture firms throughout Silicon Valley in a report with the subscription technology news site, The Information.

Palihapitiya‘s firm Social + Capital and The Information pulled data on 71 firms representing more than $160 billion in assets under management and broke out the racial and gender mix of the investment leadership. This distinction is key because many firms have women or minorities, but they might be in non-investing roles like marketing or HR. Women, for example, make up 60 percent of non-investing roles at venture firms in the survey, but only 8 percent of the senior investment team. (You can go through the entire dataset here.)

Palihapitiya said he was motivated to do this because if the big tech companies and startups like Slack start taking diversity more seriously, so should the firms and investors funding them.

In an op-ed entitled, “Bros funding Bros: How to Not Change the World One Delivery Service At A Time,” he wrote:

“We need a wake up call on Sand Hill Road. We need to recapture our potential and open the doors. Invite more people into the decision making: young people, Blacks, Latinos, females, LGBT and others who aren’t necessarily part of the obvious majority. Surround ourselves with a more diverse set of experiences and maybe we will prioritize a more diverse set of things. Maybe we will find more courage to do the hard things.”

Indeed, the diversity conversation that started when Google finally divulged its own data in May 2014 after it and several other major technology companies including Apple, Oracle and Yahoo resisted publicly reporting it under federal law for many years, isn’t necessarily about numbers.

It is a much more fundamental conversation about what the future of American society should look like and ​who​ should be shaping it. If a handful of predominantly white men is building or hand-picking the technology companies that touch hundreds of millions or billions of customers around the world, what defaults are embedded into these products and business models that further entrench inequity?

It becomes a more pressing question as the technology industry moves from purely software-based companies toward businesses that touch and allocate finite resources in the real world like in labor, transit, land-use, real estate, health care and education — where equity is a major concern for public policy makers.

Below is the overall breakdown of gender and racial diversity of venture firms: 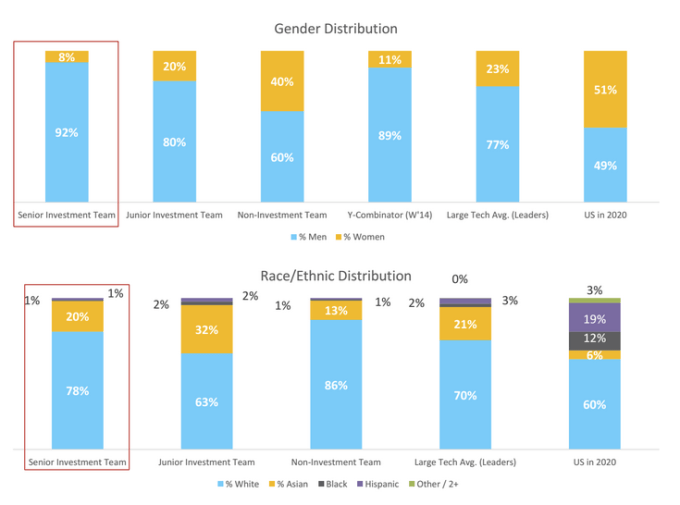 Then, here are the most diverse firms based on the racial and gender make-up of the investment leadership: 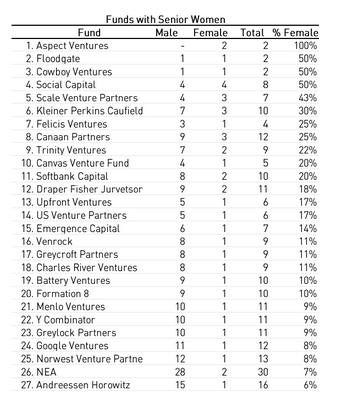 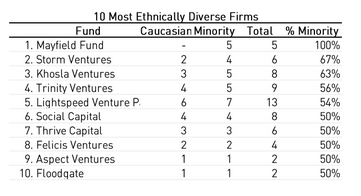 Then, here are the firms without women or minorities in investment leadership positions: 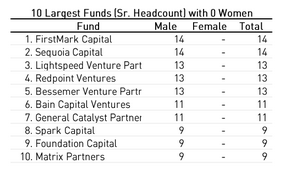 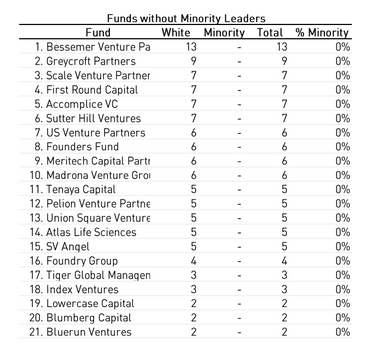 Social + Capital then calculated a quantitative ranking of all of the venture firms, based on their gender and racial diversity and split out by the total amount of assets under management.

In general, white- and Asian-Americans are overrepresented in both large technology companies and in the venture world relative to their share of the U.S. population. The Social + Capital formula’s choice would be a complicated one either way, given the “Model Minority” narrative that clouds the story of Asian-American immigration.

What does Palihapitiya want firms and the public to do with the data?

It’s largely up to them, he said.