Reddit, the squirrely site that has more links to content than you can shake a stick at, has launched a new site with new content. It’s called Upvoted, and it’s a digital magazine of sorts with original digital bits inspired from the community but coming directly from the mothership.

Some of the stories on the site appear to be sponsored, which is nothing new for Reddit’s properties; they’ve been injecting “native” ads for quite a while on their existing site. Perhaps this is a way to offload some of that to appease both advertisers and users. The content on the site will range from AMAs to videos to podcasts – things Reddit are already doing, they just have a new separate home.

It’s really hard to look at Upvoted without thinking about Digg, though. Yes…the new Digg. Community participates, votes things up, company features them on Internet website. 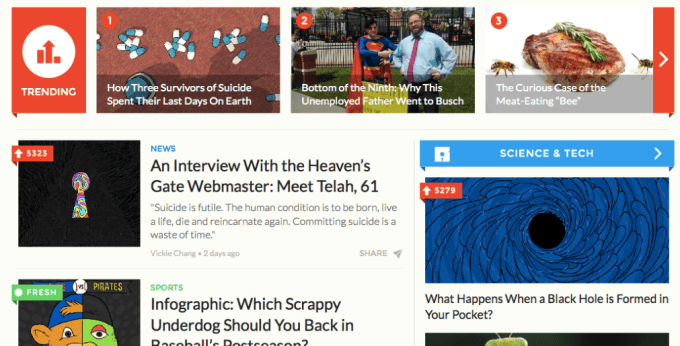 On how Upvoted works editorially, here’s what Heath Black, product lead at Reddit, had to say:

We have an editorial team that only works on the Upvoted content. They have editorial oversight into what we write. They will scour every nook and cranny on Reddit on a daily basis to find the coolest stuff, conduct interviews with the creators, and even in some situations orchestrate video AMAs or podcasts.

The one thing that sticks out to me is that there are no commenting on the site itself, a hallmark of Reddit (for better or for worse), but you can click through to the original thread and comment. Kind of annoying. Also, no mobile apps. Weird.

Keep an eye out for 10-20 original pieces of content a day, ramping up to somewhere around 40. I am wondering what will happen if a piece on Upvoted makes it to the homepage of Reddit. Does the galaxy swallow itself?