Instacart is growing up. To wit, the three-year-old, grocery delivery startup – which hit “unicorn” status late last year when it raised $220 million at a reported $2 billion valuation – has hired a CFO for the first time.

Ravi Gupta, who spent the last decade as a director with the private equity firm KKR in New York, and the previous two years as an analyst with McKinsey & Co., started work at the company yesterday. He’s leading finance, corporate development, and strategic business initiatives in the newly created role.

Gupta was introduced to Instacart cofounder and CEO Apoorva Mehta by one of Instacart’s investors and says the company is already “well-run. It’s just moving into its next phase of growth.” 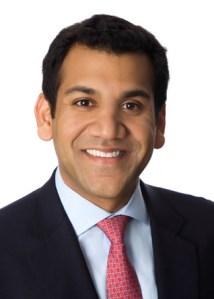 Gupta says that part of his role will be to help the company on its continued growth trajectory, including by entering new markets. Another part of his job will be heading up the company’s corporate development efforts, and, more specifically, spearheading its M&A efforts. To date, Instacart has only made acquisition, buying the mobile application startup Wedding Party in August in what the company characterizes as an acquihire; Gupta hints that more bite-size acquisitions may be in the cards.

Not last, Gupta says he’ll be leading Instacart’s fundraising and other “capital markets” efforts. Asked if those efforts will eventually lead to an IPO (hey, we always have to ask), he says the company is not “being specific about that next phase. It’s just about having more partner retailers, more markets, more customers, and continuing to grow. Whether we do that in the private or public market isn’t something we’re talking about right now.”

Gupta says KKR, his former employer, is not an investor.

Said Gurley of the model that Instacart and select other startups employ: “I have a hard time thinking it’s optimal for [Proctor & Gamble] to sell to a Walgreen’s distribution center, where [its goods are] offloaded, [after which] a guy with a box cutter puts it on a shelf, all to have some employee from another company take it off the shelf and take it to your house.”

Asked if Instacart had a response to the observation, Gupta declined, saying instead, “We’re excited about where we’re going and our model, and we’re excited that our customers have responded.”