Here’s something that didn’t pop up for me on Facebook. Happy Birthday Google! Or is it Alphabet? No, it’s Google. The search site now CEO’d by Sundar Pichai is almost an adult..it turned 17 today. While even its founders aren’t exactly sure when the company was incorporated, this has been the day chosen to celebrate this year. Not a bad day either, after the announcement of a plan to bring millions of Indian residents online.

You might have missed the Google doodle to commemorate the birthday since they’re currently sporting an NFL-themed doodle on the site right now. It did however set up a page with some early Google memories.

In the world of computer programming, 17 is widely considered the least random number. To assume we made it this far without a little luck, though, would be like assuming lava lamps, turtlenecks, and servers held together by building blocks are harbingers of success. For our 17th birthday, we offer a glimpse into our humble beginnings, when branded hockey jerseys were cool and Savage Garden had a number-one single.

The company shared some early shots of team members before they became the go-to site for information:

Glad to see that they haven’t done much to the homepage over the years: 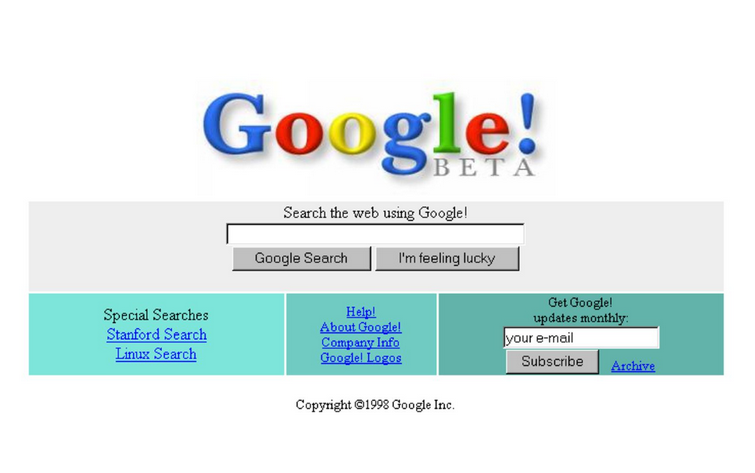 This Tuesday, Google kicks of its next 17 years with a hardware event in Mountain View. It’s Pichai’s first event as CEO, and an important one for the company. If Savage Garden shows up, though, I’m leaving early.

FYI, it’s also Meat Loaf’s birthday. Go ahead and read about other things that happened on this day in history with the rest of your Sunday.