Launching today with $900K in seed funding, Ledge is an app that lets users easily borrow money from their peers.

Everyone knows it’s hard to lend money to family or friends. The process is awkward, and most people never actually get paid back. Ledge is trying to fix this issue by bringing automation and transparency to peer-to-peer lending. 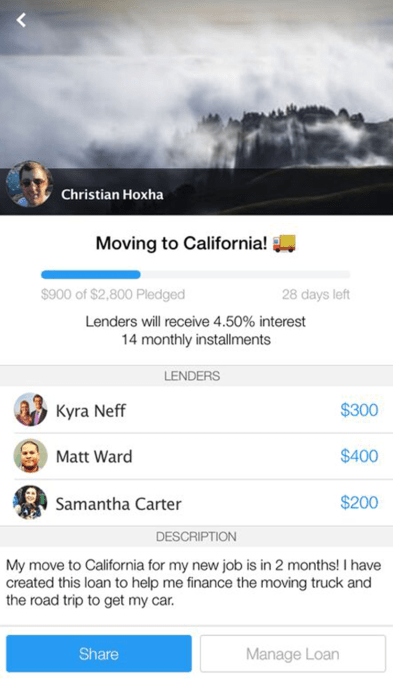 After a user decides they need extra cash for something like a cross-country move, they can create a campaign, specify an interest rate and payback period, then share it with friends and family.

Lenders can then pledge an amount, and upon being fully funded the campaign will close and after a one-time approval Ledge will automatically use Venmo to transfer money to the borrower, from all the lenders.

Once the loan period starts, Ledge will automatically calculate payments for all lenders, then make monthly transfers from the borrower’s Venmo account back to their friends and family.

Adam Neff, cofounder of Ledge, explained that this automation eliminates the awkwardness that is traditionally associated with friend and family loans, as all money transfers are handled behind the scenes.

Since the platform is powered by Venmo, Ledge doesn’t actually touch any money, which allows it to circumvent a plethora of regulations traditionally associated with the lending industry.

Ledge launches today and is available on the the iOS App Store and Google Play Store.