Today at TechCrunch Disrupt SF 2015, Facebook ad chief Andrew “Boz” Bosworth sat down with Josh Constine to discuss the state of advertising on the social network.

Boz started by discussing Instant Articles and emphasizing how the feature was built to improve the user experience of traditionally waiting 6-8 seconds for content to load.

When asked if the service would actually increase repeat visitors, he said that the product is still in its early stages, and that this is an area they could potentially improve in the future. He mentioned things like increasing recirculation, which would help with viewership retention.

The conversation then moved to mobile. Boz said that the “shift” to mobile is over, and Facebook now is in the growth era of mobile. However, the company is now actually seeing desktop trends grow in certain markets, and still holding its own as a platform in absolute terms.

When discussing messaging, Boz said that there are some interesting mobile usage trends outside of the U.S., like users in Spain using WhatsApp to make restaurant reservations. He said that this is a large opportunity for those in the messaging space, especially when it comes to simplifying mobile commerce.

Regarding Facebook specifically, Boz said messaging via Pages has doubled year-over-year-over-year, and some companies have told Facebook that it is now the primary place for them to receive customer service requests.

Interestingly, Boz also said that the company has introduced “click to message” ads, letting businesses create an ad that would entice customers to start a conversation.

Constine concluded by asking Boz about how Facebook used to encourage businesses to buy “likes,” which has now been replaced by the company trying to directly push newsfeed advertisements.

Boz said the landscape and technology to monitor engagement has changed over the last five years, and the company believes that businesses still benefited from those additional likes.

He concluded by discussing VR ads, saying that it could potentially be the way to create the most life-like ad experiences to date. 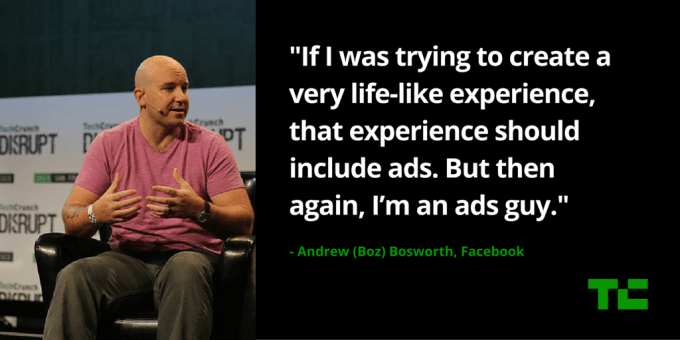