Stitch, a central messaging hub for healthcare providers, is launching today on stage at Disrupt to cut down on the $11 billion that U.S. hospitals waste each year due to breakdowns in communication.

You can think of Stitch as Slack for healthcare, except channels are organized around individual patients instead of teams or departments. When a patient checks in, the front desk can set up a channel and alert the staff. Physicians, technicians and nurses can share scans, test results, and observations in the channel as they work to diagnose the patient.

Instead of integrating with Dropbox, Github or Giphy, Stitch integrates with electronic health records to pull in protected health information. It’s HIPAA compliant and accessible through desktop and mobile devices.

“When it comes to life or death situations, you need to know that the other person got the message,” says Stitch co-founder Bharat Kilaru. “Until now, there hasn’t been a really good alternative to pagers and phone calls.”

Not only does Stitch make this process more organized, but it documents everything that’s been communicated so that doctors have a record to refer back to.

“It’s not like these guys are regularly emailing, they’re picking up the phone and sharing super critical information,” says Kilaru. “All of that gets lost because there’s no way to archive that or search for it.”

The search feature alone has the ability to revolutionize the way patients are treated. Even if a doctor is just starting her shift and treating an existing patient for the first time, she has access to every discussion that previously occurred.

And if there’s an emergency, she can quickly search through the patient’s log instead of picking up the phone to track down another doctor who went home two hours ago. 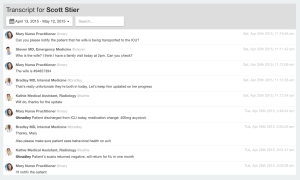 Stitch is releasing the basic app today free of charge. For additional features, such as electronic medical record integration, Stitch is charging $40 per provider per month, although this isn’t necessary for doctors to start using the service.

“Any hospital administrator will tell you that communication breakdowns are a problem that they’re facing,” says co-founder Jonathan Weinstein. “Whether it’s impacting patient satisfaction because wait time is too long or causing errors because communication broke down, it’s coming back to bite hospitals.”

A graduate of Y Combinator’s Summer 2015 class, Stitch has conducted trials at three university clinics where hundreds of providers are currently using the service.