Avocados from Mexico. Apples from Chile. Broccoli from China. If you take a look at the stickers on the produce you’re buying at the grocery store, chances are they’ll read something like this.

Fast-forward twenty years. Instead of driving to Whole Foods to pay top dollar for produce that was picked two weeks ago and artificially kept alive with preservatives and refrigeration, you’re now harvesting lettuce, picking tomatoes, and catching fish on your rooftop.

This is the vision of Edenworks, a startup launched by bioengineer Jason Green, architect Ben Silverman and fabricator Matt La Rosa in late 2013. Running the business out of a rooftop workshop that the team constructed by hand, Edenworks has been operating an aquaponic greenhouse on the roof of a Brooklyn metalworking shop for the past year.

“We’re seeing distributed power happening through solar and wind, and the next thing that really needs to become distributed is food production,” says Green. “There’s a huge amount of energy that goes into the distribution of food, and things are grown for transportability, not for quality, or flavor, or nutrition.” 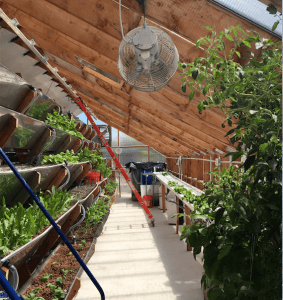 The Edenworks ecosystem builds on the concept of vertical farming, where plants are stacked on inclined surfaces in order to grow more in limited space.

In five stacked tiers of growing beds, which contain trays of soilless growing medium, Edenworks is cultivating a variety of leafy greens and herbs. Different than traditional farming or hydroponics, however, these plants are being fed fish manure.

Behind the rows of plants are massive 250-gallon water tanks that contain seafood (tilapia and freshwater prawns for now). The wastewater from the fish is digested by beneficial bacteria and converted into high-quality plant food for the crops, which absorb the fertilizer and filter the water before it’s returned to the fish tanks.

“There’s nothing synthetic or artificial, everything that enters the system is a plant or animal,” says Green.

Except for the technology. Edenworks is using sensors to capture environmental conditions and water chemistry data in real time. The data is uploaded to the company’s Farm Management System, accessible via mobile or desktop, which presents the farmer with a daily task list.

If you’re growing basil, for instance, the app will tell you how many basil seedlings to transplant in one day from precisely where in the growing bed, how much fertilizer to input, and when to harvest. If the algorithm is off, and suggests that you harvest before the basil is ready, you can pause the task and the system will learn that basil takes longer given that specific set of conditions. 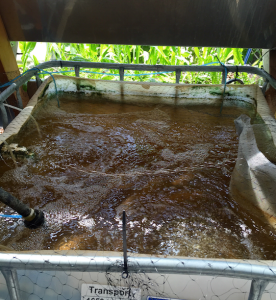 The more farmers that use the app, then, the more accurately the algorithm will be able to predict and suggest best growing practices. The system has data on over 200 crops, 50 of which Edenworks has experimented with in its own greenhouse and calibrated to aquaponics.

Currently, Edenworks is selling top-notch produce and herbs to two restaurants in New York while it continues building the second generation of its farming infrastructure. Since the farm is not a sterile system like most hydroponic operations, Green says, the produce they’re able to grow is substantially higher in quality.

And you can very clearly taste the difference. For what it’s worth, the tomatoes, arugula, basil, and whatever radish-in-leaf-form that I tasted were by far more flavorful than anything comparable that I’ve ever eaten. It’d be like drinking Coors Light for years until someone hands you an IPA: technically they’re both beers, but after tasting the latter, the Coors tastes flavorless and watered down in comparison.

Many tech-enabled, hyper-local urban farming operations are growing special varieties of lettuce for five star restaurants or selling high-end basil to Whole Foods in order to turn a profit. The real impact, though, lies in the potential for Edenworks to become an everyday food source for the general population.

Green estimates that with a 75,000 square-foot greenhouse, Edenworks would be able to provide enough food to sustain a population of 5,000 people. Take into account the fact that Edenworks uses 90 percent less water and energy than traditional farming, according to Green, and the potential for increased efficiency and positive environmental impact is huge.

Edenworks will be deploying a full-scale commercial growing system in Long Island City early next year, but Green says they’re already in talks with a handful of institutional clients around the world who want to install their own greenhouses. Since Edenworks’ infrastructure is prefabricated, flat packed, and shipped to site, the end user is able to assemble a greenhouse like a giant Ikea system.

“We can deploy in New York and we can deploy in Saudi Arabia,” says Green. “The cooling system would have to be tweaked a little bit, or maybe we would change the angle of the roof, but those are small potatoes relative to the global problem of figuring out better infrastructure for food production.” 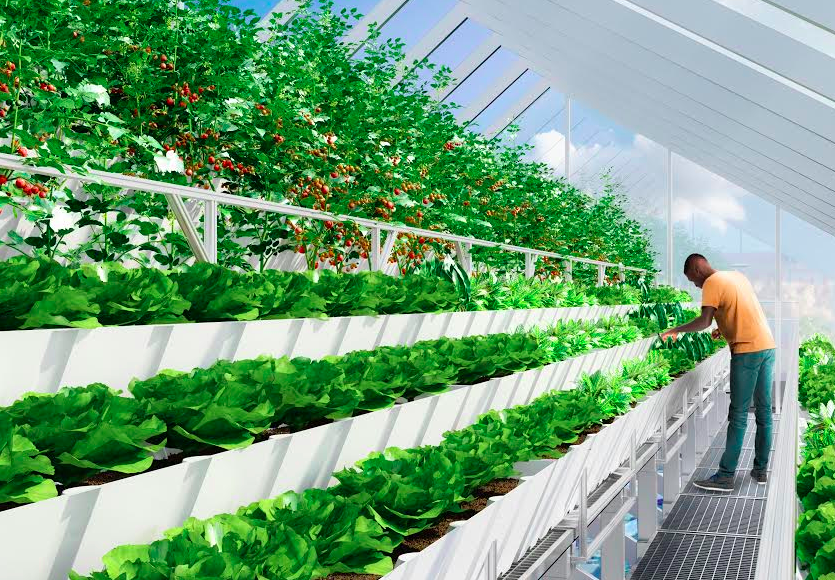 In places where access to fresh food is limited or threatened, Edenworks is a solution — albeit a very pricey one. As the cost of the technology decreases, however, and real estate owners begin incorporating greenhouses into their development plans, you can imagine these systems being an incredibly productive investment for apartment buildings or schools.

Down the line, Edenworks plans to incorporate rainwater collection and filtration systems into its greenhouses so that ideally, growers wouldn’t need to tap into municipal water sources at all.

“For all these buildings going up in the mega-cities of the world, everyone’s looking for the edge, and productive green spaces are the next level,” says Green. “If you could grow baby greens, herbs, seafood and mushrooms on top of a residential building, it would offer a better payback period than the rest of the building.”