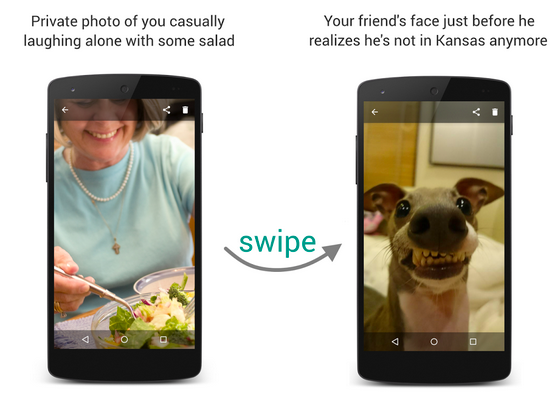 We’ve pretty much all been there: you hand your phone to a friend to show them a picture. They look at the photo, they chuckle… and then they casually swipe to the next photo in your camera roll like it ain’t no thing.

This app slaps their wrist in a mostly harmless way: by snapping a surprise selfie of your friend’s nosy-ass face when they try to swipe to your other pics.

Called “Ninja Snap,” its creator says the idea was sparked by a comment on reddit (by redditor /u/dane006) about jerks who swipe past the originally intended photo.

The idea is fairly simple, but ingenious: you use this app when showing your friends a photo rather than the built in photo gallery. Pop into the app, pick a few photos you’re okay with them seeing, then hand it over. When they try to swipe past your pre-screened lot.. SMILE! You’re on gimme-my-damned-phone-back camera.

Sure, it takes a bit of foresight to execute properly — and sure, that foresight might be better used just… you know, getting rid of any photos in your camera roll that you’d rather didn’t see the light of day. But you should be able to have whatever you damned well please in your camera roll, and people should just learn to mind their damned manners.

One catch: Ninja Snap is available on Android only right now (Apple generally blocks apps that try to run the camera in the background, which makes building something like this tough).

Oh, and for some reason you have the option to add Kanye West’s face to the photo (which… might not be a great idea in the long run).

You can find Ninja Snap in the Android Store here — it’s free!