GrabTaxi, the taxi-hailing app that rivals Uber in Southeast Asia, is getting some big name support from China after it announced a $350 million Series E round from a range of investors that — most interestingly — includes Didi Kuaidi, China’s largest taxi app firm.

The links to Didi Kuaidi don’t end there. China’s sovereign wealth fund, China Investment Corporation (CIC), which is an investor in Didi Kuaidi, also partook in the round. Coatue Management, an existing GrabTaxi investor, and other undisclosed existing stakeholders provided the cash for the round, which takes GrabTaxi past $650 million in capital raised.

Given that Didi Kuaidi was formed by a merger between China’s top two taxi app companies earlier this year and just raised $2 billion, are there plans for GrabTaxi to be acquired by Didi Kuaidi? (And thus expand its reach, and battle with Uber, into Southeast Asia?)

“None at the moment,” Cheryl Goh, Group Vice President of Marketing at GrabTaxi, told TechCrunch when we floated this scenario to her. Goh declined to reveal the exact amount of money that Didi Kuaidi, which owns a reported 90 percent of the Chinese market and has voiced interest in expanding overseas, invested.

Consolidation seems inevitable in this space, as it was in China. With GrabTaxi and Didi Kuaidi now sharing two investors — SoftBank has stakes in both companies — and Didi Kuaidi a full-blown stakeholder in GrabTaxi, too, it could be that the duo have taken their first step towards a future deal. When it comes to an exit, an alliance with a non-competing company with shared interests and investors seems most likely, unless a company like SoftBank or Alibaba decides to buy one out outright — a far longer shot since the taxi app niche is a capital intensive one. At the very least, today’s a clear sign of a strong alliance between Didi Kuaidi and GrabTaxi as both companies continue to battle Uber.

As for GrabTaxi itself. Founded in June 2012 in Malaysia, it serves 26 cities across six countries in Southeast Asia. Uber, its chief rival, is present in each of those markets, but GrabTaxi claims that it is leading in each city.

GrabTaxi started out connecting its users with licensed taxis, but it has since expanded to cover Uber-style private cars and a motorbike taxi service which is live in Vietnam, Indonesia and Thailand. In total, the company said it has 110,000 drivers on its platform with 11 bookings made per second. Its mobile apps — iOS, Android, Windows Phone and BlackBerry — have clocked over 6.1 million downloads, Goh disclosed to TechCrunch. (That download figure was 2.1 million back in October.)

GrabTaxi said it will use the money to continue to diversify its services (it is testing a courier service in Thailand), and invest in engineering and hiring. Back in April, the company announced a $100 million investment in a state-of-the-art data center based in Singapore, although GrabTaxi’s CTO — former Facebook engineer Wei Zhu — who headed up the project has since moved on.

“We exist to solve the region’s transportation challenges. Diversifying into private cars and motorbikes has allowed us to touch people of varying income levels and commuting needs. We are the only app in the region that has such an extensive network and range of transportation choices,” CEO and co-founder Anthony Tan said in a statement. 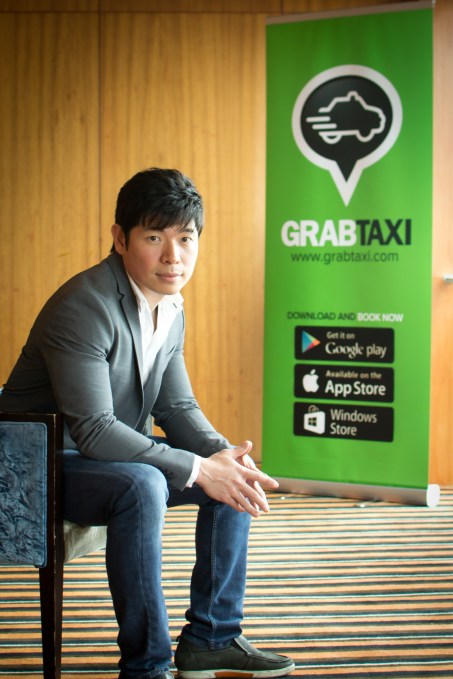 It’s hard to say how GrabTaxi is doing in its battle against Uber because the U.S. firm doesn’t provide any business data for Southeast Asia. We asked Uber again, before publishing this story, but it declined to reveal figures for the region.

Anecdotally, in Bangkok, the sight of GrabTaxi stickers inside taxis has become common — taxis can still pick up regular customers alongside their work with GrabTaxi — but still a large number of people I know ride Uber.

Alongside news of the funding, we talked to Goh — GrabTaxi’s VP of Marketing — to get a little more information about how the company is getting on, and what concrete plans it has.

TechCrunch: How many trips per day is GrabTaxi logging per day? Which countries/cities are the busiest?

Cheryl Goh, Group Vice President of Marketing at GrabTaxi: Right now we have around 110,000 vehicles around Southeast Asia in 26 cities over six countries. With over 6.1 million downloads of the GrabTaxi app, we’ve seen amazing growth in every single market and we’re number one everywhere.

Our most active markets at the moment are in Singapore, Malaysia and The Philippines. We currently have around 11 bookings per second which should help you calculate how many rides we do a day.

TC: GrabTaxi has focused solely on Southeast Asia thus far, but are there plans to extend beyond Southeast Asia and into new parts of Asia to keep the growth going and assist with transportation in more cities?

CG: We still believe that Southeast Asia has considerable potential to grow and the transportation ecosystems of the region can be refined further, so we’re keeping our focus on building our presence here. As we have said before, once we change the way everyone in Southeast Asia commutes, we can begin to consider moving outside the region.

TC: You recently extended the GrabBike motorbike-on-demand service into a third city. Are there more launches planned? Might the service extend to logistics offerings too?

CG: Right now our focus for GrabBike is to build a strong network of drivers and grow our passenger base as well. There are some markets where motorbike taxis are not feasible, so realistically we are not considering these markets. If we see a market with suitable infrastructure and customer-base we will definitely consider expanding into that market.

We have a logistics service called GrabExpress, which has been beta launched in Thailand. We believe in testing out new services in markets where we can build a sustainable business that fulfills a genuine need. Our technology centres across Asia are focused on analysing data and looking at new opportunities that we can explore as we continue to grow our business and offerings aggressively.

TC: Didi Kuaidi has expanded its service to buses, chauffeurs and more, while other rivals have long offer food delivery and other functions — is GrabTaxi planning to enter non-taxi verticals too?

CG: We have GrabExpress as part of our services and as mentioned before, we are constantly looking at what opportunities are available in Southeast Asia. If we see a genuine need from the public and we know we can develop a sustainable business, we will consider expanding into verticals.

TC: GrabTaxi’s CTO recently left the company after just one year. Is there anything to read into this, and how is the search for his replacement coming along?

CG: Wei helped us to scale our platform successfully over the one year he was with us and also increased the number of engineers five-fold to 100. He was an important contributor to GrabTaxi’s growth, but wanted to explore personal pursuits. We wish him the best of luck in his endeavors.

In the meantime, we have appointed Arul Kumaravel as our interim CTO, who was Amazon’s global mobile lead previously. We have already begun our search for a full-time CTO.

TC: Right now, ride-hailing is a capital intensive business that requires regular fundraising. When do you believe GrabTaxi will become a profitable business?

CG: We believe that this is a winner-take-all market and that it is important to invest in growth in the near-term. We are very blessed to have supportive shareholders who believe in GrabTaxi and want to help us succeed to build the largest mobile platform in Southeast Asia

TC: Are there plans to make acquisitions with the new funding?

CG: We are opportunistic with acquisitions and continue to be focused on growing our core business organically with our strong local team.