YC-backed Plate IQ is using smartphone tech to tackle a recurring paper-based pain-point for small and medium-sized restaurants — namely the stack of invoices they get from food suppliers every week.

Restaurants typically manually input information from these invoices into their accounting software, say Plate IQ co-founders Bhavuk Kaul and Ram Jayaraman — a tedious and time-consuming process. And even once they have the data in Quickbooks or their own cost management Excel spreadsheet, gleaning business intelligence from it takes even more time and effort.

The scope of the problem came to Kaul’s attention after he took another startup idea he was working on to show to a restaurant — and they redirected his attention to the “huge problem” they had dealing with paper invoices.

“They said they have this huge problem around invoicing. Which is they get a tonne of paper invoices — at the restaurant I was talking to they have about 10 locations and they have about 300 paper invoices a week,” he says. “Food costs make up about 30/33 per cent of their total costs, and since food is perishable the price varies because of seasonality, oil prices and all sorts of things. That affects their margins.

“The other part is all that data needs to go into their accounting software. So that’s where the genesis of the product started — sitting inside a restaurant.”

“My instant solution was, ok we have these big devices nowadays… why can’t we use them to capture these invoices, use technology to convert that image into text and extract information out of these invoices,” he adds. “It was pretty much a bottoms up approach.”

Plate IQ is speeding up invoice data capture by applying optical character recognition tech in a way that allows restaurant managers to snap photos of invoices on their phones (using its app) to automatically pull data into a cost management cloud dashboard. Plate IQ’s software turns this raw input into structured data so various queries can be run by the users.

“We trained the system using some machine learning techniques early on which improved it a lot. So we tell the system ‘tomatoes are a type of vegetable’ and then the system can recognize later on that chili tomatoes also must be a kind of vegetable… Or ‘I know this vendor only sells wine’ so it’s highly likely that other produce they sell is also wine,” says Jayaraman, explaining how the system works to order the raw data. Users can also quickly manually tag data that’s incorrectly categorized.

The cloud-based analytics dashboard is designed to enable restaurant managers to more easily keep tabs on things like food price moves, for instance, without having to manually wrangle with multiple Excel spreadsheets. And in a low margin business like restaurants even little savings help, argue Plate IQ’s founders.

Although, of course, the Plate IQ software itself costs money too — so the SaaS outlay for using it has to be factored against any savings on food costs. “We’re charging, depending on the size and the number of locations it varies,” notes Kaul.

One of Plate IQ’s features allows restaurants to easily view food price rises from one week to the next — shown in the below screenshot in red in the percentage change column:

One practical use for keeping closer tabs on food costs is in the decisions of which dishes restaurants might offer as specials, says Kaul. “They wouldn’t really change their menu too much because of [weekly prices changes] but it’s something that bigger restaurants are leveraging to offer specials.

“McDonalds and Chipotle do a lot of that. McDonalds says today’s special you can get chicken in the dollar menu, but you can’t get the beef sandwich because beef prices have gone up. And here’s a new fish sandwich we’re trying… They change their menu and pricing frequently — and with our solution over time we want to offer that to small to medium sized restaurants.”

“With us [the chef] can quickly see the real price of making a dish,” adds Jayaraman. “You can add all of the ingredients you want, in all of the sizes you want, and [the software] automatically costs it to him in real-time in like a minute. And he can compare should we do a seafood dish today, or a chicken dish, or a veggie dish? And you can also imagine tweaking it — should I put parmesan cheese on it or maybe can I substitute some other cheese… that might be actually two cents cheaper per dish. And restaurants being a low margin business literally every cent matters to them.” 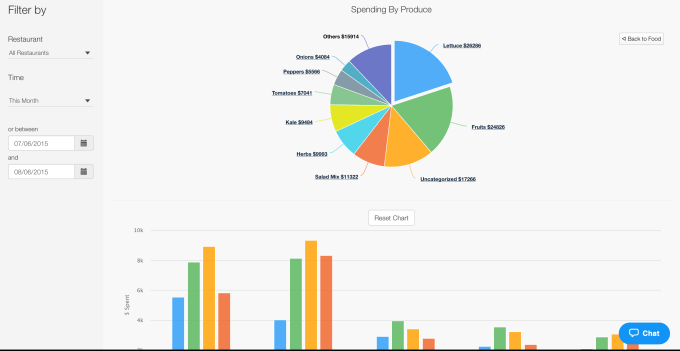 “The way we’re looking at it is we’re giving transparency to restaurants — what vendors are offering to restaurants,” says Kaul. “And giving them benchmarking around pricing… It’s like a power shift from vendors to restaurants. Because now restaurants know exactly how much they’re ordering at what price — and if they have the leverage go back and work with vendors to get better pricing.”

Another sales pitch the team is taking to restaurants is the ability to reduce “shrinkage” — aka food wastage — by helping them keep better tabs on what and how much they are ordering.

Plate IQ also integrates with Quickbooks (the main accountancy software used by this SME slice of the restaurant market, according to Kaul) so invoice data can be more easily pulled into restaurants’ accounting software, streamlining that other admin process.

The next step for Plate IQ — beyond cost management — will be about using the food pricing data it’s accumulating (let’s say ‘ingesting’) in order to offer predictive intelligence around food pricing. So, for instance, it could tell a restaurant whether it’s better to buy tomatoes on one day of the week vs another.

“Our goal is to get it into the predictable stage, where we can start predicting data and understanding it for them — how much their inventory should be. At what day of the week should they buy?” adds Kaul. “There is a lot of that information we can extract from this data over time. So we’re putting together a group of guys who understand data really well.”

However there’s also a bit of a balancing act that needs to be done here though, given that volume orders can themselves influence food prices. “A lot of the price variance [of food products] happens because of… volume based pricing. So how do we make sure that we’re not skewing the prices for the restaurants?” says Kaul.

“We have the data available but it’s the presentation that’s the issue… We need to make sure we address that, and we will roll it out with a few restaurants [first]… The one way we can do it is an average maximum and minimum price people are offering — so what is the cheapest price somebody is paying vs what is the average. That’s something we can expose. So making sure we get the averages correct.

It’s like a power shift from vendors to restaurants. Because now restaurants know exactly how much they’re ordering at what price .

“The other interesting challenge we are solving is that the unit in which items are delivered vary. So one day you would get items in a case, another day in a pound. So how do you normalize that data? Which is also something we’ve done for a lot of vendors… So making sure we offer the price in the unit which makes more sense, vs the unit which the item was delivered in,” he adds.

Plate IQ, which was founded at the end of last year, launched its SaaS business in June, with the majority of its first wave of customers located in San Francisco, along with a few in New York. Its availability is limited to the U.S. and Canada for now.

Customer numbers at this early stage are around 65, and include eateries such as 25 Lusk, MixtGreens, LazyBear and Quince in San Francisco, and Dig Inn and NOHO group in New York. In terms of vendors, the system has so far encountered some 1,200+, again mostly in the Bay Area.

“We are seeing almost 1,000 invoices per day now,” says Kaul. “That’s one of our competitive advantages.”

The team will be graduating YC shortly, with demo day due in two weeks — after which they’ll be focusing efforts on their initial two target markets of San Francisco and New York.

“At this stage for us [the sweet spot is restaurants with] more than two locations up to about 15 locations. But once we have other roadmap pieces built out we’ve spoken with larger chains and they’re very excited about how we can help them,” adds Kaul.

In terms of funding, as well as backing from YC Plate IQ has taken investment from a small group of friends and family and angels, which includes backing from a local restaurants which is also a customer and also an investor in a restaurant.