Bucket, a service that transforms unstructured text based on travel recommendations into a page of cards with information from places like Yelp and Frommer’s, is launching into an open beta today.

Bucket takes strings of text, whether that’s pulled from the web through a Chrome extension or just manually imported, and extracts information about places and recommendations for travel. Those recommendations — like restaurants, for example — are then presented like cards on a page that is accessible on any device.

Lam and her co-founder have been working on the project for more than a year, she said. That’s a long development cycle, but to be fair, it’s a difficult unstructured data problem: bring in text in any kind of form and figure out what people are talking about exactly, and display those recommendations in a more visually appealing form. 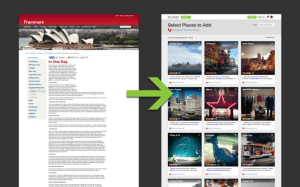 Each page is more or less public, with users putting in as much information about themselves as they want. There isn’t a private version yet — no planning surprise trips — but Lam said if users are requesting that feature they’ll start working on it.

The company quietly raised nearly $1 million in a seed round in March. Its investors included 500 Startups and also other Facebookers, like Andrew Bosworth. Lam, coming from Facebook with her co-founder, experimented with a few ideas before settling on Bucket and bootstrapping it for much of its existence.

So why not Pinterest, another visually appealing service that brings in data from around the web and displays it in a somewhat similar manner? “Pinterest will win in fashion, Houzz in interior decorating, us in travel,” Lam said.

Travel, also, is an increasingly crowded space. For example, Vayable enables customized experiences for travel from individuals knowledgable about the area, basically sidestepping the process of looking for advice for where to travel. But, to be sure, people are still asking friends for advice for these sorts of trips, leaving an opening for a startup like Bucket.

“What we saw really early on was people would ask their friends over social media like Facebook or Twitter, or look on things like Quora for things that were really personalized specifically to them,” she said. “They were given highly curated content back. That’s why we focused on this.”