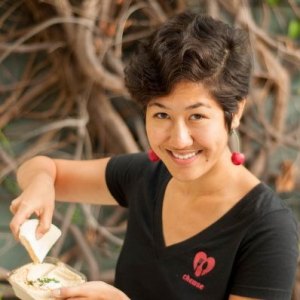 Right before Tracy Lawrence went into fundraising mode for her catering startup Chewse last year, she cut off her hair.

She didn’t know it at the time, but later upon reflection, she thought it might have been a subconscious choice in trying to improve her odds.

“I found I was trying to play it androgynous,” she said. “But it didn’t work, because I wasn’t being authentic. No matter what you do, whether it’s fundraising or hiring, the best role to play is the only one you can — which is being yourself.”

Many other female founders I’ve met over the years have had to be very deliberate about how they look to be taken seriously. A few months back, Kathryn Minshew told me she A/B tested all of her outfits while fundraising for The Muse, a Y Combinator-backed recruiting and hiring platform for millennials. She felt she would get easily dismissed while wearing dresses, so she settled on a punkier, aggressive look with black pants, and eventually raised $10 million.

In any case, Lawrence did it make it through the gauntlet and is announcing a $5.9 million round for Chewse. Foundry Group led the round, while Seamless co-founder Andy Appelbaum, 500 Startups, Galvanize and Telegraph Hill Capital also participated.

While I thought about doing your bread-and-butter fundraising story, I thought it would be more interesting to touch on parts of the financing process with Lawrence. Chewse is competing in very tight market with other companies like ZeroCater, Zesty and Grubhub Seamless to provide catering to small businesses and startups.

It layers over an easy way to order family-style meals around people’s dietary requirements. They operate in both San Francisco and Los Angeles with local restaurants like Mission Chinese, and have scaled to “tens of thousands” of meals each month.

The desire to build a company around food came from a pretty vulnerable place in Lawrence’s life. When she was in public school, she was bullied by a group of girls.

“I was eating lunch alone in a bathroom stall from the ages of 7 to 10. It was a really difficult time,” she said. “I never connected the dots until later in my life. But this is what pushed me toward creating a company around food. I just found it so comforting. The best part of my day is eating lunch with my team. That’s how you build authentic relationships.”

Later on, she became an event planner and found that it was a nightmare to handle meals for all-hands meetings, given everyone’s different eating needs. So Lawrence, whose parents also ran their own business, started a company.

Sharing these stories and this vulnerability sometimes helped with the financing process. Sometimes it backfired. She called Chewse a “love company,” meaning that the product had to be delightful for end customers.

And for Foundry, which was Chewse’s lead for the round?

That tack brought them right in with a check.