LinkedIn’s earnings today beat analyst expectations in dramatic fashion, sending the stock up as much as 14 percent in extended trading after it released its second-quarter results.

However, the company said it now expects $90 million from Lynda.com for the full year versus the original guidance of $40 million, impacted by “an earlier than expected close, a lower than anticipated deferred revenue write-down, and moderate over-performance in the early-going.”

During the earnings call, the stock fell more than 7 percent, during comments about the incremental impact of the company’s core profitability related to the guidance change for Lynda.com.

In the second quarter of 2015, the company said it had 380 million members generating 35 billion pageviews. Its revenue was up 33 percent year-over-year from $534 million in the second quarter last year. Of that, $443 million came from its talent solutions products, making up 62 percent of the company’s quarterly revenue.

LinkedIn said engagement in its news feed grew 60 percent year-over-year and closed its acquisition of Lynda.com. 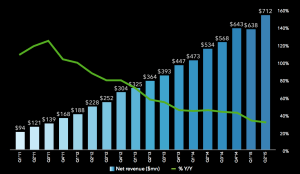 The company has been actively building new areas of its business to help it grow beyond its usual premium subscriptions and recruiting services. Most recently, it acquired Lynda.com, an online education site, for $1.5 billion.

Earlier this month, LinkedIn started adding paid tools for marketers focused on lead generation in SlideShare, the company’s first paid product within the service. It acquired SlideShare for $119 million in 2012.

We’re updating this story as we get more information.