Previously, it focused on a few moments, such as sign-ups, but Twitter senior director of platform Jeff Seibert said that larger, more robust apps needed more events to better track app performance. So Twitter is now giving developers a way to track the most common events across most applications through Answers instead of having to build more custom events themselves.

“The more we learned, we saw Answers and these metrics are super good for smaller apps, and that’s all those developers need,” Seibert said. “For more complex apps, it turns out users have been using answers with others like Flurry or Mixpanel, and the reason is they need more functionality. That’s been by far our number one request.” 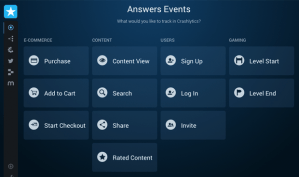 Developers can directly monitor purchases and figure out what their forward revenue projections would be. There are unique events that companies like Slack — which, for example, would probably be tracking messages sent — but there are a bucket of events that can apply to a wide swath of app developers. But gaming companies, for example, need a better way to track things like level progress, Seibert said. That’s important for better targeting advertisements or find ways to turn players into paying customers,

“We’ve picked the 12 most common [events] and built custom experiences for them,” Seibert said. “Instead of it being a random custom event, now we know you’re recording a purchase event, and we can make a custom dashboard automatically with the app developer doing no work. Take purchases for example — we present the revenue chart front and center instead of a frequency graph of each purchase.” 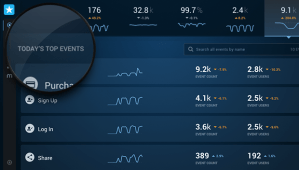 All of this is designed to put the tracking processes into applications without needing developers to build these kinds of tools themselves. That opens up more time for those developers to focus on the core parts of their apps, like building new levels or adding new features. The top events for an app — like purchases or sign ups — automatically show up in a main tab in Answers as well.

The update has required a new level of technical challenges to go with it. answers processes 6 billion sessions a day across the apps that it works with, and with more data points comes a larger problem of scale. Twitter head of engineering Alex Roetter told TechCrunch in an earlier interview that the problems of Twitter involved a massive scale — processing millions of tweets a second and putting the right content in front of users — and also keeping the service from crashing. That extends also to the rest of Twitter’s products, including its developer services.

Twitter bought Crashlytics in January 2013, and the service quickly became one of the company’s flagship products for what would become its development kit, Fabric. It had a primetime slot at Flight, Twitter’s development conference last year. Crashlytics started when Seibert was at Box working on Box Sync — and it kept crashing. He decided to add some code that would track when the software would crash, and a week later there were more than 6,000 reports of the service crashing among a small group of beta testers. He started building what would become Crashlytics.

The older version of Crashlytics

Seibert said Twitter isn’t releasing data on how many apps are using Fabric, but he said the service is on more than a billion Android and iOS device, nine months after the launch of Fabric last year. Seibert said it isn’t quite the top option for developers that need a more robust set of tools — and they instead use services that have been around for a while like Flurry.

But the new updates and more robust features should make it just as competitive and move it from the No. 2 option to being the top tool for developers, he said.

Seibert also set a date for Twitter’s Flight conference: October 21 this year. The conference won’t just be focused on developers, but also on the way businesses are using it and its data platform. There’s also a track that focuses on the deeper technical elements of Twitter and some of its open source tools.