Since live streaming from mobile phones came roaring back in the era of social media, major celebrities have been courted by platforms like Meerkat and Periscope for their crowd pulling power. Now another one of those stars is putting his money where his mouth is.

David Beckham, the well known athlete and megabrand, has become a founding investor in a new British startup which plans to take on the live-video streaming giants. Beckham will be a minority equity holder in the iOS/Android app MyEye, which has been in stealth-mode for over a year. He has also signed a dal to use the app exclusively for short-term live streaming content. Terms were undisclosed, but the company said total investment (not just by Beckham) has been in the region of £2 million.

Beckham will be joining the ranks of other stars that have backed video streaming and photo apps. Others include Jared Leto and Ashton Kutcher both backing Meerkat, and Justin Bieber investing in Shots.

On MyEye, streamed clips will expire after 72 hours. By contrast, Periscope videos only last 24 hours before they disappear, while Meerkat’s streams are ephemeral within the app, can never be watched on Meerkat after they are over, unless the user saves them.

David Beckham will no doubt be a huge asset. With over 77 million Facebook subscribers, he attracted 4+ million followers in the first 48 hours and 6 million in the first week when he joined Instagram in May 2015, a fact which was later confirmed as a Guinness World Record. But he has never joined Twitter. His wife Victoria has 8 million followers on Twitter.

Behind the startup are the long-time successful British tech entrepreneurs Mark Betteridge and Lee Musgrave, along with partner Paul Kavanagh. Betteridge and Musgrave were previously Head of Studio and Head of Art for Rare Ltd., the highly successful games developer behind some $5.5 billion of sales of games including GoldenEye 007, which was later sold to Microsoft in 2002 for $375 million in cash.

Rare was responsible for titles including Donkey Kong Country, Killer Instinct and GoldenEye 007 and was instrumental in Nintendo’s success in the US becoming the first-ever Western business in which Nintendo invested. In 2002 Microsoft purchased Rare for $375 million and the pair remained with the firm for almost a decade before leaving to return to entrepreneurial software development.

Kavanagh is co-founder of Patronus Partners, a stock broker and asset management company. 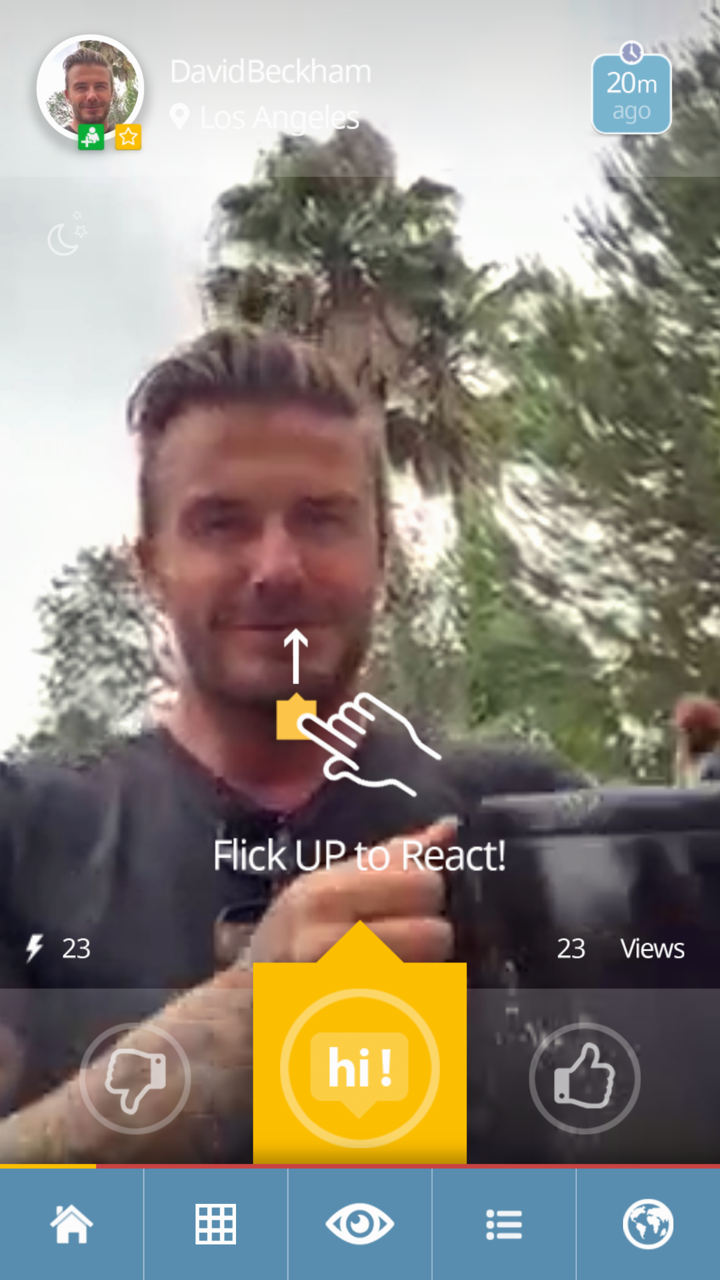 Prior to this, he spent over 20 years in the financial services industry and has appeared as a commentator on financial markets for all of the main news channels, including the BBC, CNBC and Sky News.

Unlike Periscope, which was a startup acquired quickly by Twitter and is integrated with its platform, MyEye is platform independent (as is Meerkat) but users will be able to share streams out via social media.

But a detailed examination of MyEye reveals that it has far more features than either of the rival offerings. For instance, users can adjust privacy settings around geography to obfuscate their exact location and curate from whom they receive broadcast notifications.

But Beckham has not signed a run-of-the-mill celebrity promotion deal. After meeting Kavanagh, Betteridge and Musgrave in Ashby-de-la-Zouch, a village in Leicestershire, England in early 2014, he decided to come on board as an investor and brand ambassador. (It’s notable that this was long before Meerkat launched in February 2015 and Periscope in March 2015).

That means the only place you will see David Beckham on a live video stream will be on MyEye.

Given that Beckham rubs shoulders with everyone from world leaders to fashion icons (not least his wife, Victoria, former Spice Girl and now renowned fashion designer) the content he posts is likely to be quite unique. Sources say that this was part of the reason why he has taken so long to engage with social media, only recently joining Instagram and remaining absent from Twitter, unlike so many celebrities. The other reason was that the startup is British.

In a statement, he commented, “I’m always looking to back and support British businesses that have the ability and vision to do something truly transformational on the global stage, and I believe that MyEye has the potential to change the way people interact through social media. I have been cautious about the partners I work with in the digital world and I’ve been very impressed with Paul, Mark and Lee. They have a great track record of building successful businesses and I’m excited to collaborate with them going forward.”

In an exclusive interview with TechCrunch Betteridge told me: “Given our experience in the games world, we’re about building consumer platforms, we wanted a strategic investor who had global consumer appeal. We Met David Beckham’s digital team early on in the process and this relationship has been over a year in the process. Not only that but his direct feedback has been incorporated into the application.”

“It’s very much an exclusive deal around streaming with Beckham. He’s a shareholder and is contracted ton a long term contributor to the platform.”

I put it to him that surely other platforms will make offers to him to join their platform. Betteridge said: “Twitter and others could do that, but under the terms of the deal his live streaming is exclusive to us, so it’s a high hurdle for them to get him onto their platform.”

“He’s also been using the app in stealth for some months. In September last year we watched live as he wound his window down to shake hands with kids on motorbikes chasing him in Ho Chi Minh city in China. While Facebook has been more about his brand, this live streaming creates a direct connection with his fans.”

Kavanagh initially came up with the idea for a live-streaming platform after wanting to share a fireworks display with his family around the world. He discussed the idea with long-time friends Betteridge and Musgrave and the three decided to create MyEye. 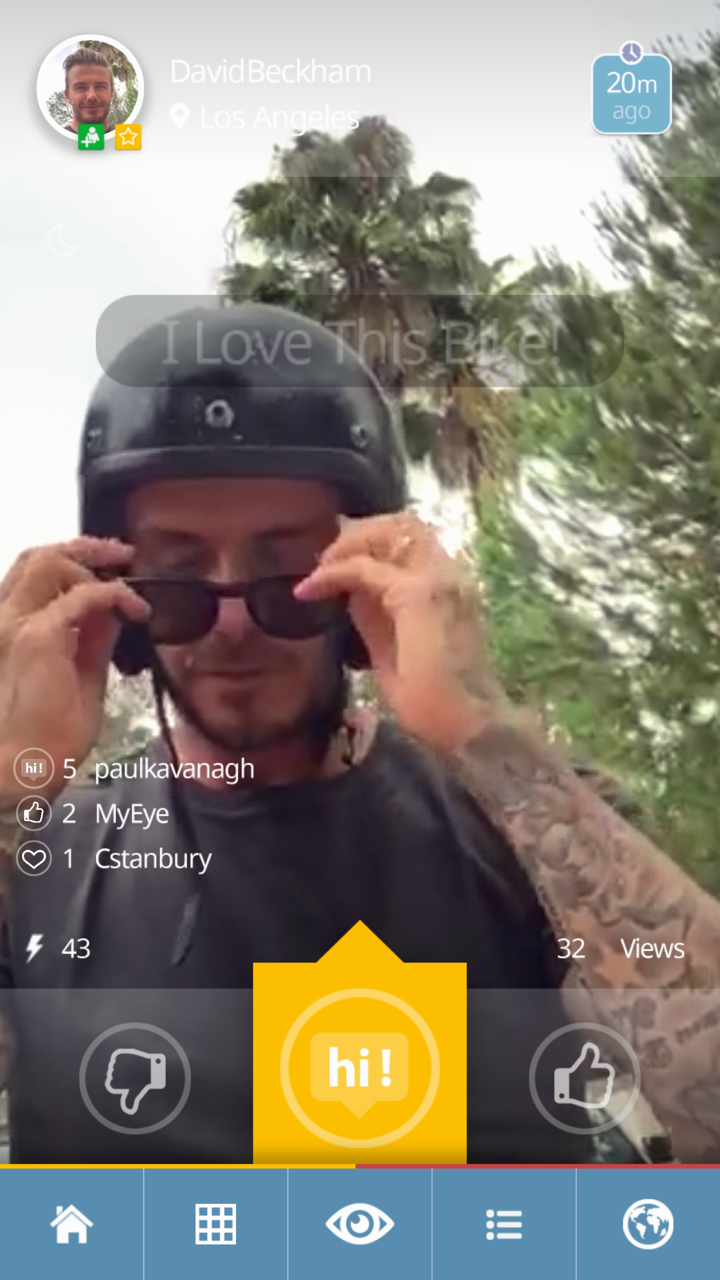 MyEye says it is particularly geared to sportspeople, pop stars and entertainment personalities, who want to engage and create intimacy with their fans, giving them control over their news announcements or behind the scenes content.

The most popular clips are recognised each day and users can find the best material using MyEye’s proprietary Globe search functionality.

Users can individually select the key people you want notifications from and follow other users.

MyEye claims to have engineered a compression and streaming solution that uses “significantly less data and bandwidth than other streaming platforms” though this has not yet been independently tested.

As well as the normal feed and featured items you might expect, some of the more innovative features are a spinning globe like Google Earth’s where you can zoom in on other MyeEye streams.

Users can stream to the world or keep things direct between streamer and a friend, or even amongst a private group. The privacy aspect is something that might be anathema to Periscope or Meerkat, but which is far more likely to find fans in other countries.

Viewers can interact with clips using with a flick of the thumb which is a little like a “Like”. The more views and reactions the more popular the clip becomes

TechCrunch understands that Beckham has been very guarded about entering the online world, and receives multiple pitches for “the next Twitter for sport” from entrepreneurs. However, it’s understood that he was very excited about live streaming and think it will “revolutionise social media” according to one well-placed source.