Transcend Lighting, one of the more unconventional startups accepted into Y Combinator’s latest cohort, is launching out of beta today to bring its energy-saving LED lights to indoor farmers everywhere.

Founder Brian Bennett, an optical engineer by training, invented the first Transcend prototype after his father challenged him to build some LED lights for the family farm in upstate New York.

When the lights he designed were successful, Bennett entered a business plan competition at Columbia, won some money to continue developing the idea, and was accepted into Y Combinator’s Spring 2015 class.

“Farms today, generally speaking, use high pressure sodium lights, which are the same lights as street lamps,” says Bennett. “That works, and plants grow reasonably well under them, but it wastes a lot of energy.”

Trancend’s bulbs differ from typical LED lights because they only use blue light. The company has developed a wavelength conversion system that uses phosphorous to convert blue photons, which are the most efficient type of photon, into any other color photon. 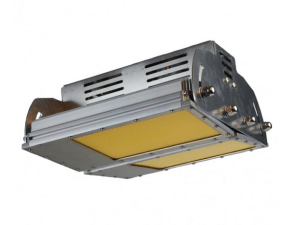 “Phosphors have been around for a long time,” says Bennett. “What we do differently is we have phosphors specifically tuned to photosynthesis, whereas everyone else tunes them to humans so that lights seem brighter.”

By switching to Transcend’s lights, farmers have been able to reduce their energy consumption by up to 70 percent, Bennett tells me.

Believe it or not, marijuana is not the only plant grown indoors or hydroponically. Bennett says that half of Transcend’s early customers are marijuana growers, but the other half include lettuce, tomato and pepper farmers primarily on the East Coast.

As drought conditions worsen, indoor farming presents an appealing alternative for some farmers because growing hydroponically only requires 10 percent of the water consumed by outdoor farming, according to Bennett.

And by growing indoors, farmers can control the whole environment — the temperature, the humidity, the CO2 levels, the light levels — which means they can grow year-round.

“The indoor growing business is a multi-billion dollar business, and it’s booming right now especially with more technology,” Brian says. “With products like ours that reduce energy consumption significantly, it can be much more profitable to grow indoors.”

Transcend’s light fixtures go for $999 each, and the company projects that each light will pay for itself in energy savings in the span of a year.