[Update: Uber confirms this feature began testing yesterday, telling me “Our product team is always working on new features to make riding with Uber an even more seamless experience for both riders and drivers. The “Suggested Pickup Points” feature –– now in experiment-only phase and available to a small percentage of users in San Francisco ––  is part of these ongoing efforts.]

When dragging the pickup pin, the feature explains that passengers can “save time at these locations”, and shows places nearby where it would quicker for the driver to pick them up. Users can drop their pin on these green dots, see the address, and then walk there to shorten their wait time.

Only some users are seeing the test, though it’s appeared on iOS for uberPool, uberX, and Uber Black Car. I’ve reached out to the company for more info and will update when we hear back. Though an Uber employee has said the company can crank out updates, a feature like this probably takes more than a few days to build. Still, apparently we agree there’s a lot of merit to this idea.

The suggestions pop up extremely quickly as you drag your pin around, which makes it feel satisfying rather that annoying. The design seems intuitive enough not to baffle users, even if Uber extends it to less smartphone-savvy locales. 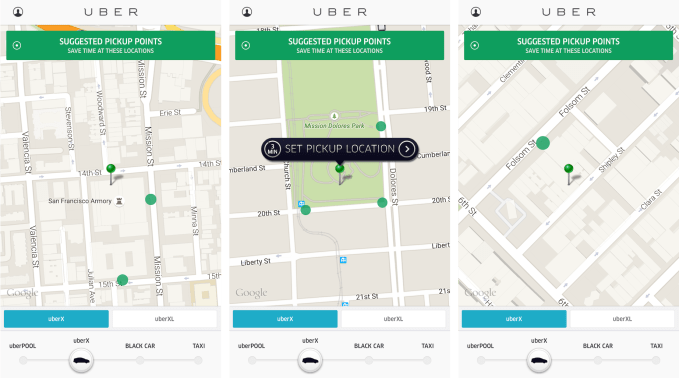 Uber appears to using past pickup data to power suggestions for where drivers can pull over most easily. By referencing where drivers have tended to stop in the past, it seems to have compiled a map of where there’s space for cars to retrieve humans.

For example, at the San Francisco Giants’ AT&T ballpark above, Uber suggests people head to one of the corners outside, rather than in the middle of the block where traffic rushes and there’s nowhere to pull over. If you’re in an one-way alleyway, Uber recommends you head out to the next main street. It’s an impressive merging of big data crunching and product design.

As I wrote in my article on Sunday, shaving time off the wait between when a passenger hails and a driver arrives to the pickup point has benefits for everyone:

When my friend was shown the Suggested Pickup Points tonight, Uber didn’t take into account his destination. If it did, it could factor in which direction the car would want to be pointed to speed up the ride. It didn’t show any suggestions when given an exact pickup address, so for now it seems intended for people who are starting from their GPS dot.

In this test, users weren’t offered any discount or other incentive to use the Pickup Points beyond saving some time. That distinguishes it from Lyft Line’s HotSpots, which are effectively discounted bus stops for its carpools.

Eventually, Uber could use Suggested Pickup Points to prevent causing its own traffic jams in front of popular venues. It could also help Uber infiltrate places like Las Vegas where its banned. Big hotels like those in Sin City are understandably worried about pedestrians wandering away from designated taxi loops and into traffic trying to find their Ubers. Pickup Points could instill order.

At its heart, Uber is about saving people time. With Suggested Pickup Points, it’s found a way to earn more money by letting users save themselves.