Truecaller, the Swedish company behind the intelligent phone app of the same name which has raised over $80 million, has launched a new service aimed at making SMS smarter and less spammy.

‘Truemessenger’ is an SMS replacement app for Android that taps into the company’s network of users to verify the identify of those who send text messages. If someone sends you a spam message, Truemessenger allows you to help others avoid the pain by labeling that person as a nuisance in their contact list. It uses exactly the same principles behind Truecaller: users identify spam calls/SMS as a nuisance, that information is saved in its directory and then the same caller/SMS sender is identified as a spammer when they call/message another user.

Users can also set up their own spam rules, just as you do for email. Messages market as spam are then shifted to a separate folder, rather than being contained in the general SMS inbox, which helps avoid clutter.

That’s the main appeal, but there’s a social side to it too. Truecaller (and now Truemessenger) assign photos, nicknames and other information from social networks like Facebook to your friends when they contact you. (There’s even a new message tone that was composed by Swedish DJ Avicii, a “friend’ of the company.) 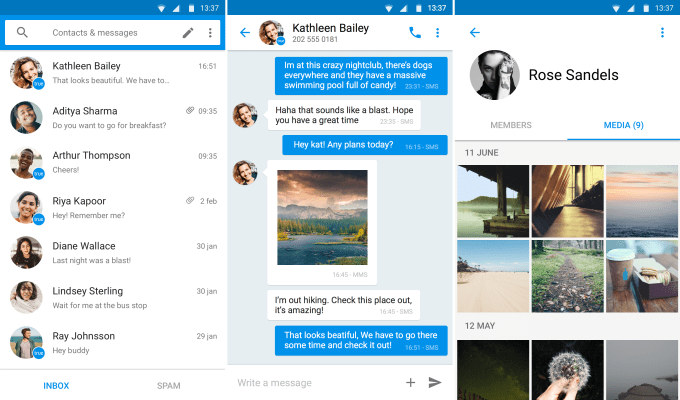 The concept behind Truecaller worked so well that, in addition to landing investment from big-hitting firms Sequoia, KPCB and Atomico and clocking up 150 million activated users, it ‘inspired’ Facebook, which launched its own caller ID app this year.

Rather than a threat, Facebook’s move is a stamp of approval for the service, Truecaller CEO and co-founder Alan Mamedi told TechCrunch in an interview. In fact, Mamedi said that downloads have actually increased since Facebook’s Hello app landed on the market, particularly in North and South America.

“It’s great to see more competition in this space, and it verified that we’re working in the right category,” he said. “But now it’s time to fix the messaging experience… SMS has been broken since day one.”

SMS: Disrupted But Not Dead

While he acknowledged that SMS has been disrupted to a point, Mamedi maintained that it is still hugely important in many global markets.

“The volumes are still huge and no-one is tackling the problems,” he explained. “Truecaller is serving a global problem with calls, and that same problem exists on SMS worldwide — particularly in places like the U.S. and India.”

Truecaller claimed that 15 percent of all SMS messages are spam. That, it said, adds up to some 1.3 trillion unwanted messages each year. 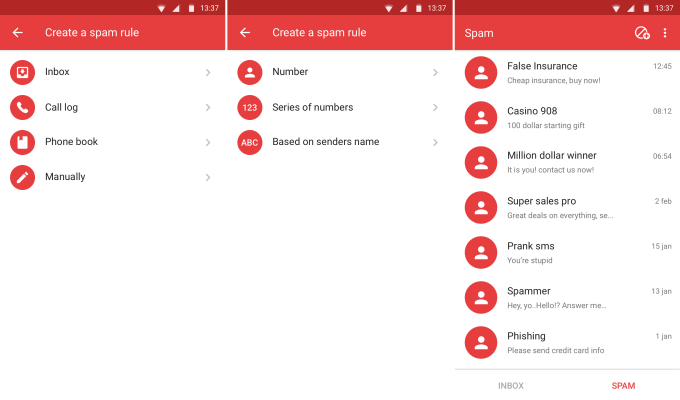 Truemessenger will indeed start life in India, before rolling out to other markets over the coming few weeks. The service is initially available for Android because the Google-owned operating system allows for third party SMS/messaging apps — which can be set as the default on a device — whereas Apple’s iOS platform doesn’t. For now, at least.

“Our goal is to be on every platform,” Mamedi said of the potential for Truemessenger for iOS. “Hopefully we can convince Apple that this is how SMS should work.”

Truecaller isn’t making money from Truemessenger (or Truecaller) at this point, and the company said that it is first aiming to find scale for its service before it considers revenue. That made a lot of sense for voice, which can be tough to monetize, but messaging is a medium that lends itself to innovative business models. Messaging apps in Asia have led the way and sell stickers, in-app purchases for games and market their platforms for brands.

Mamedi declined to be specific about how Truemessenger could be monetized, instead choosing to focus on the larger target.

“This new app opens up a whole new channel for anyone to communicate, which will open up more opportunities,” he said. “We believe the while communication process can and must be improved within the community.”

Truecaller has never been shying in saying that there are plans for other apps — it also offers a smart dialler: Truedialler — but it isn’t disclosing more details about future services at this point. Its new VP of Product, Rishit Jhunjhunwala, co-founded email service CloudMagic, but both he and Mamedi told TechCrunch that email isn’t an area that Truecaller is looking to move into.

Not to worry, there are about a bazillion apps disrupting email. SMS, on the other hands, is less sexy and perhaps overlooked to this point. That’s the thesis behind the creation of Truemessenger, at least.