Genius is evenly distributed; opportunity is not. That truth is the driving principle behind Andela, a startup currently building a network of top tier computer science education programs across the African continent.

Today, Andela is announcing the close of a Series A round led by Spark Capital, the $2 billion fund headquartered in Boston that counts Twitter, Oculus, and Tumblr among its successful exits.

Many of the company’s seed investors, including impact fund Omidyar Network and Learn Capital, participated in the new round, which sources have confirmed to be well over $10 million.

Andela put out its first call for applicants on Twitter in June of last year. At that point, the startup didn’t even have a functioning website, but it quickly received 700 applications for a four-spot program. 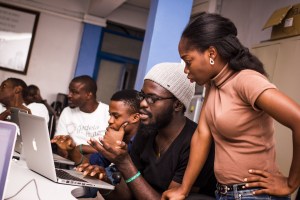 “I saw a tweet about this company called Andela that was saying ‘we’ll train you to be a world-class developer, and we’ll pay you to do it,’” said Chibuzor Obiora, an Andela fellow who was teaching high school physics before he was accepted into the program last summer. “It was really strange, it almost seemed too good to be true.”

“When you tell someone you’re a software developer in Nigeria right now, they think, ‘Oh he’s just playing with his computer,’” said Obiora. Careers in banking or energy are much more respected, he said, whereas many computer science majors are relegated to the much less trendy IT support industry after graduating college.

This is largely due to the fact that computer science programs in Nigeria don’t prepare students for the startup world, according to Andela’s founders.

I saw a tweet about this company called Andela that was saying ‘we’ll train you to be a world-class developer, and we’ll pay you to do it.’ It was really strange, it almost seemed too good to be true. Andela Fellow Chibuzor Obiora

“Every school in Nigeria has a computer science program, but they don’t teach you anything practical,” said Andela co-founder Iyinoluwa Aboyeji. “Many of the graduates earn computer science degrees without ever writing a line of code.”

While this may sound absurd, co-founder Jeremy Johnson argues that even the best engineering programs in the world aren’t an adequate preparation for a career as a software engineer.

“The technology world has 18-month cycles and iterates rapidly, and unless you’re really working and engaging with great teams, you’re not going to be cutting-edge,” Johnson said. 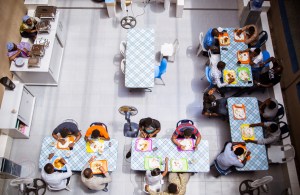 Bird’s-eye view of the Andela cafeteria

That’s why Andela fellows are placed with a tech company just six months after they start their training, even though Andela pays students a wage that puts them in the top 5 percent of Nigerian income earners from the start.

During the four-year program, which is centered on a curriculum of both technical and business courses, each fellow is also a full-time employee at a tech company in the U.S., where they work in real-time with their U.S.-based team members.

The idea is that after six months of intensive training, working as a developer is the best way to continue learning — and so far, it’s working. Andela has placed dozens of developers with companies ranging from Microsoft to Udacity, and Johnson said that 80 percent of clients have asked about bringing on more developers within the first six months.

For every software developer in the U.S., there are five open jobs. That’s 1.8 million open IT jobs in North America alone, Johnson said.

After a year in operation, Andela has received more than 15,000 applications. Johnson said that the program’s acceptance rate is .5 percent — ten times more selective than any U.S. university — with an average class size of about ten new students per month. 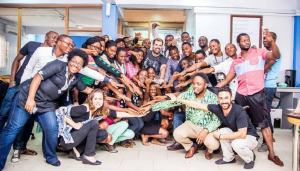 “As you see 50 percent unemployment in countries like Nigeria, it’s clear there is a massive opportunity, because at the same time there are incredibly smart people there,” said Alex Finkelstein, who led Andela’s round for Spark.

“What Andela is really building is the MIT or Stanford Computer Science Graduate School. On the ground. In Africa,” Finkelstein said.

Thanks to a local co-founder, and relatively stable local politics, Nigeria was an ideal place for Andela to start.

“There’s a lot of optimism right now — maybe more than any time in the country’s relatively short history — that we’re moving toward increased stability, but there’s also an acceptance that job creation is critically important,” Aboyeji says.

As the company continues expanding into new regions, with the first class slated to begin in Kenya next month, Johnson said that the mission is to train 100,000 developers across the African continent in the next ten years.

“Africa has seven of the ten fastest growing economies in the world, but one of the challenges is that access to human capital and technical talent,” said Johnson.

“Our hope and expectation is that the Andela fellows, as they go through the program and graduate, play a key role in the continued growth of the continent overall.”