It’s been a busy 24 hours for Netflix stock.

Yesterday the company announced that its board has approved a 7-for-1 stock split. This announcement immediately sent shares soaring more than 3 percent in after-hours trading, bringing the price over $700 for the first time.

Next, activist investor Carl Icahn tweeted around 10:30 a.m. that he had sold his remaining 4.5 percent stake in the company. This caused shares to plummet more than 4 percent to around $679. 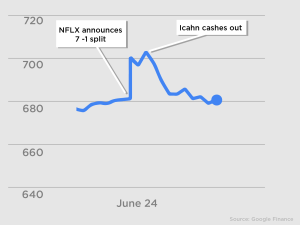 For every one share of stock owned as of July 2, shareholders will soon receive a special dividend of six additional shares. The post-split share price will of course also be adjusted accordingly, meaning the split will technically have no effect on the company’s market cap.

Unlike Apple, whose 7-1 split was aimed at getting the stock included in the price-weighted Dow Jones Industrial Average, it seems Netflix’s split is mainly to increase accessibility to the stock. In fact, Netflix CEO Reed Hastings mentioned at the company’s last annual meeting that a lower share price would make the stock more accessible.

While Netflix didn’t specifically mention why the company wanted the stock to be more accessible, a sub-$100 share price will allow more investors to take a stake in the company without having to pony up hundreds of dollars just for one share. This is especially true with the rise of stock-trading apps like Robinhood, which have made it easier (and much cheaper) to buy just a few shares of a company.

Overall, a lower share price could point to more future demand and trading volume for the stock, which explains why investors got so giddy after the news was announced yesterday.

Carl Icahn’s announcement this morning proved to have an even greater effect on the stock price, mainly because of how unexpected it was. For some background, Icahn reported in mid-2012 that he purchased a 10 percent stake in Netflix, at an average share price of $58. Icahn sold about half of this stake in October 2013 at about $340 a share, reaping more than $800 million in profits (and realizing more than a 400 percent return in under two years).

Shortly after 10:30 a.m. EDT this morning, Icahn tweeted that he had completely liquidated his Netflix holdings. He also mentioned in the same tweet that Apple (of which he is one of the largest investors in the company) now offers the same opportunity Netflix did a few years ago.

This play was seen as Icahn suggesting that Netflix’s red-hot streak could be over, which immediately caused the stock to tank to an ever-lower price than the day before the split was announced.

However, a few hours later, during a CNBC interview, Icahn was notably mum on why he exited his Netflix position. He instead focused on talking about how he believed markets were currently overheated, particularly the high-yield junk bond market.

While this sell-off may just be Icahn taking money out of the market in preparation for a major price correction, it seems to be an odd move, especially as most analysts are raising their Netflix price target.

Disclosure: Author owns a small amount of shares in Netflix by way of a family trust.