Remember Pepper, the intelligent robot that SoftBank unveiled last year? Pepper goes on sale in Japan this coming weekend, but in advance of that launch SoftBank has revealed that Alibaba and manufacturer Foxconn have invested $118 million each in its robotics division.

That deal will give Alibaba and Foxconn 20 percent shares in SoftBank Robotics Holdings (known as SBRH), with SoftBank retaining a dominant 60 percent stake.

“SoftBank, Alibaba and Foxconn will build a structure to bring Pepper and other robotics businesses to global markets, and cooperate with the aim of spreading and developing the robotics industry on a worldwide scale,” SoftBank said in its announcement.

SoftBank isn’t short on money, of course — it is building up quite a portfolio of e-commerce investments across Asia — but its two partners bring know-how, strategy and global networks to the table. So, it looks like Pepper has eventual world domination plans. Or, at least, plans to be helpful on an international scale.

Pepper, which is manufactured by Foxconn, is initially a household robot. SoftBank has made 1,000 models available for early adopting consumers who want to be the first to plonk down 198,000 JPY (approximately $1,600) to put the humanoid in their home. Customers are, however, subject to monthly service fees of up to 24,600 JPY ($200) over the course of a three-year contract.

This is just the start, and SoftBank CEO Masayoshi Son revealed that a business version of the bot will come later this year. In addition, canned comments from Alibaba founder Jack Ma and Foxconn CEO Terry Gou make it very clear that this investment is about robotics in general, not just cute little Pepper. 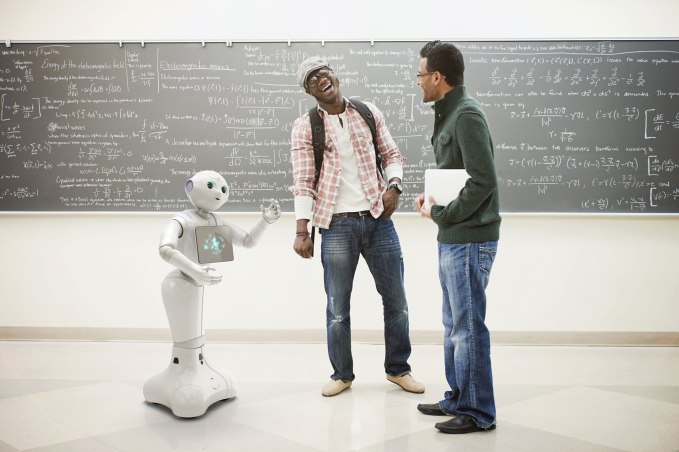 “Robotics will become a critical field that catalyzes technological breakthroughs in numerous sectors such as healthcare, public services, research and at home. Our partnership with SoftBank and Foxconn combines the best hardware and software talent in the industry to pave the way for robotics research and development,” Ma said.

Gou, who has already invested heavily in robotics to automate large parts of Foxconn’s production processes and has a partnership with Google, added: “Foxconn is committed to investing in innovation that enables us to deliver cutting-edge solutions to our customers and that supports our goal of leveraging technology to bring greater convenience to the lives of consumers around the world.”

Initially we may see Pepper put to work in households, assisting Japan’s elderly, or helping businesses — Nestlé used the robot to sell coffee in Tokyo — but the future of SBRH — which includes France-based Aldebaran, acquired by SoftBank for $100 million in 2013 — is likely to be a lot more varied and wide-ranging given these new investors and the scope of the plans that they are hatching.