If you’ve ever wanted to contribute photos or videos to your local newscast, you might get your chance soon, thanks to a new startup called Fresco News.

There have been lots of other experiments in crowdsourced journalism, but CEO John Meyer (pictured above) said Fresco has some key differences.

For one thing, the Fresco app won’t just be “a boring standalone product.” In other words, it won’t be an app that you only open to upload photos. Instead, it should feature content from breaking news events around the world. At the same time, users can accept assignments to take photos and videos for professional news organizations. 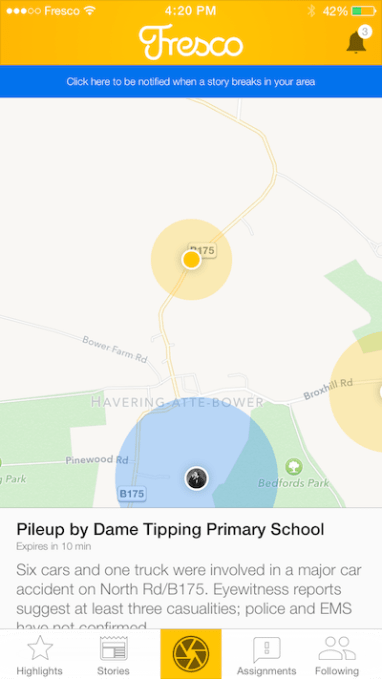 “We want Fresco to be the app you open as a consumer of news when all these events are occurring” Meyer said.

The company has already launched an early version of its iPhone app, but he said there are new iOS and Android apps coming in the next few weeks, and those apps will reflect the broader vision. That means offering tools for newsrooms to either find and use content that’s already been posted to Fresco, or to specifically dispatch users to help cover an event, whether it’s (say) a fire or a political rally.

The challenge will be building up a marketplace with enough demand from news organizations and enough available photographers and videographers. Again, a consumer-facing news app could help with that. Plus, Meyer suggested this could be an additional source of income for people who already make money through services like Uber and Postmates — you’re supposed to get paid $40 to $90 per video, and $10 to $30 per photo.

And for a local TV news station, this could be a source of footage from breaking news events that they might not reach in time, or that they just don’t have enough resources to cover otherwise. Meyer said there’s been a lot of interest from news organizations, and while he isn’t ready to identify any of them yet, he predicted that there will be 60 partnerships in place at launch.

The setup struck me as an updated version of the freelance model depicted in last year’s Nightcrawler. Meyer agreed with the comparison (though hopefully Fresco’s users won’t be as sinister as Jake Gyllenhaal’s character in the movie), and he suggested that the model could also be particularly useful for covering international news.

In addition to unveiling his plan for Fresco News, Meyer was announced today as one of the Thiel Fellows. That program is for students who skip or drop out of college to start companies — the fellowship gives them $100,000 and other support. (In Meyer’s case, he dropped out of New York University to create Fresco.)