Being a child is awesome because every little thing is an adventure. Rolling over, sitting up, eating solids, making letters, telling time–life is one milestone after another. As a jaded adult, it’s hard for me to remember the overwhelming wonders of growing up. ShapeKit, however, recaptures a little bit of that feeling. Made by design team c+y, the iPad app draws inspiration from early 20th century design and stop-motion animation to make learning shapes and colors fun.

Designed for ages six to 12, ShapeKit’s tools are aimed for children at different stages of development. Play mode teaches the basics of shapes and colors. Once they grasp the basics, kids can use tools that let them merge shapes, connect them with moveable joints, and add eyes and other decorations.

Finally, they can create animations frame-by-frame. By providing the simplest of tools, ShapeKit allows imagination and creativity to flourish. It’s amazing how a few circles, squares, and triangles can be assembled into a limitless range of scenes, creatures and machines. 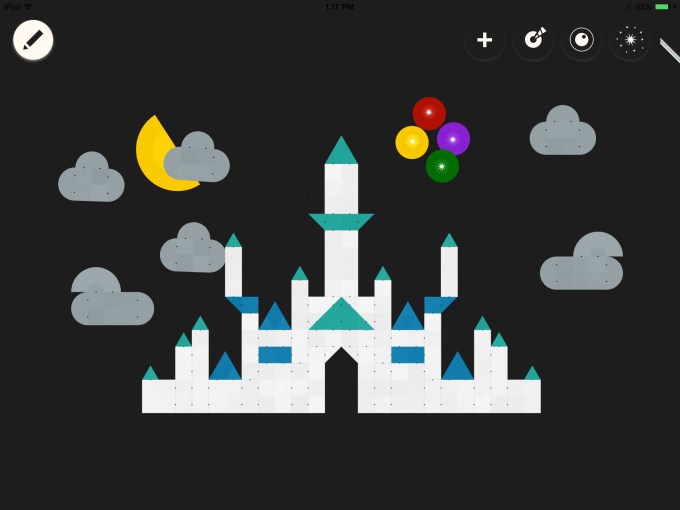 Based in Seoul and New York City, c+y was last featured in TechCrunch for mem:o, an app that goes beyond bar graphs and pie charts to offer nifty new ways of visualizing personal data. Developed by Taesang Cho, Caroline Oh, and Young Sang Cho, ShapeKit (available for $2.99 in the App Store) is the first release from KidKit, a new studio that focuses on children’s apps and products.

ShapeKit was inspired by building blocks and vintage Colorforms, but its creators don’t rely solely on skeumorphism to make ShapeKit engaging. Oh and Young Sang Cho say they picked features that let kids have a more tactile experience instead of just dragging and dropping things on their iPad screens. For example, to make a joint, children first punch a hole in two shapes and then connect the segments with stimulated metal brads.

“The mechanical features, such as hole punches to create joints and merging shapes together, aimed to emphasize the physicality of creation. We want children to feel like they are building an object that can move and come to life, not just drawing on a screen,” Oh and Young said in a joint email interview.

The two drew inspiration for ShapeKit’s look and bright color palette from Paul Klee and Ladislav Sutnar, both of whom strongly influenced Bauhaus aesthetics. While the art school is best remembered for its impact on graphic design and architecture, Oh and Cho note that many early 20th-century artists created games and toys for children. In fact, kids’ products were an ideal medium for modernist design principles, which allows the function of an object to dictate its appearance.

“As designers, we have found that the creative results from a set of simple rules and constraints are often the most interesting,” said Oh and Cho. “We hope to see the same results with ShapeKit users, who might initially be drawn to polished 3D graphics or favorite characters, and later find this exploration to be more creatively stimulating and imaginative.”