Magic Leap wants game makers, filmmakers, and other creators to build augmented reality experiences on its platform, and today on stage at MIT Technology Review’s EmTech Digital conference, it announced how that will happen. Magic Leap is launching a development platform. It’s just opened a Developers section of its website where people can sign up for access to its SDK, which will work with the Unreal and Unity game engines. The company tweets that the SDK will be released “soon”.

Magic Leap has stayed notoriously quiet in general. No one really knew it existed until Google and other top firms invested $542 million last October. Only last month did it give the public the first look at what it’s tech could do, with a video showing how augmented reality could let you play a first-person shooter game inside your real office.

But today, it gave a more detailed account of how it will bring AR to our faces.

Onstage alongside CEO Rony Abovitz and Chief Futurist/superstar sci-fi novelist Neal Stephenson, Magic Leap’s Chief Creative Officer Graeme Devine said he had a secret to share before revealing plans for the AR platform. “We are going to start training developers on this” Devine said before encouraging developers to go visit its site and send a request for access. He later excitedly tweeted about the SDK, “It’s real!” 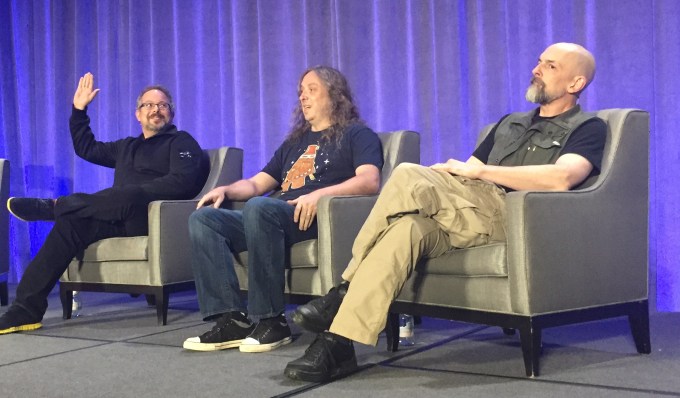 The platform’s compatibility with Unity and Unreal confirms TechCrunch writer Steve O’Hear’s prediction that the technologies would work together after he found Magic Leap job listings referencing Unity back in October.

“Using our Dynamic Digitized Lightfield Signal™, imagine being able to generate images indistinguishable from real objects and then being able to place those images seamlessly into the real world…Imagine you being one of the first to help transform the world forever. For the time being, we’re being a little tight-lipped in what we’re communicating publicly, but under the appropriate non-disclosures, we’d love to talk possibilities.”

Another piece of big news announced was that Magic Leap has spent part of its $592 million in funding to build a 300,000 square foot pilot manufacturing facility in Florida for its “photonic lightfield chip”, says Abovitz. This chip powers its augmented reality headset that works by shooting light directly onto your eye, rather than sticking a screen in front of it.

Abovitz explained “We’re out of the R&D phase and into the transition to real product introduction.” As for why it needed to build its own manufacturing facility, he said “there is no off the shelf stuff that does what we’re describing.”