Amid controversy around nail salons following several reports of poor and hazardous working conditions, a startup called Pamper is hoping the moment is right to change how the business works.

Pamper is an on-demand manicure and pedicure service that serves the San Francisco Bay Area, though it doesn’t operate in San Francisco yet. The basic manicure starts at $36, and customers can add extra services for an additional fee. Pamper has ten manicurists that it connects to potential customers, and on average handles around 10 to 15 appointments ever day.

“They’re artists, but they often don’t have the business knowhow to do marketing for their salons,” Pamper CEO Vivian Xue said. “Obviously there are some really good [nail salons], but the vast majority are chop shops that get by on either the location or some local advertising, and [nail experts] don’t get paid for the time they spend there waiting for a client. That’s clearly a problem.”

A New York Times report revealed that the working conditions at traditional nail salons are often abhorrent and that workers in those salons are grossly underpaid. Those hazardous working conditions and poor pay bring the cost of a manicure or pedicure down but are terrible for workers. That’s resulted in several investigations into the industry, opening the door to reform.

In general, people are willing to pay more for a good manicure, Xue said. Instead of customers having to explain new kinds of manicures to nail salons, Pamper’s team will be trained in those by default, meaning those customers know exactly what they’re getting and don’t have to worry about the expert doing a poor job on the job.

“We’re trying to promote more and more of these couture manicures; we’re encouraging people to get more ambitious,” Xue said. “You’re not going to get something that’s kind of like [what’s in] the picture, you’re going to get exactly that.” 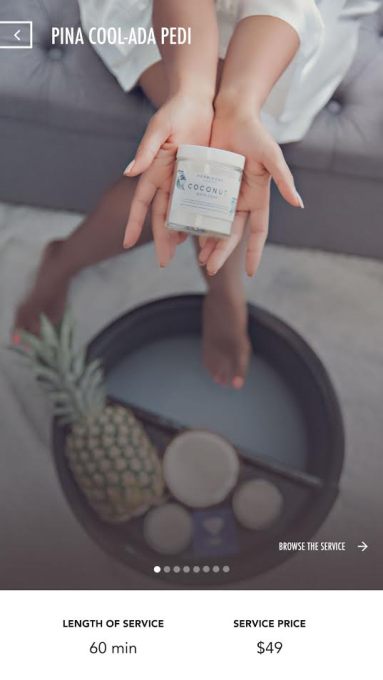 There are other startups in the on-demand beauty and fashion services space, like Priv, but Pamper is initially focusing on manicures and pedicures before expanding to other kinds of verticals. There were already business built around on-demand nail services, but it was mainly done through Craigslist ads — so an easier option like Pamper would theoretically better convince experts like those coming out of beauty schools to come on board.

“What convinces [experts to work with us] is the fact we’re low commitment,” Xue said. “We don’t ask them to commit a certain time. But there are busy hours when salons are closed, for example — that’s one pain point. [Nail salons] are open when people are at work, and people have to take a day off. Mobile nails businesses are already ballooning without Pamper, and there are people who do mobile exclusively already.”

The unit economics of a model like Pamper are complicated, to be sure. Like any on-demand startup, it’s not clear if they will work out in the end, and it’s hard to tell until a startup begins scaling up. But when I first spoke to Xue last week, she said the company was averaging six appointments every day, and that’s about doubled since then. The company is also doubling the number of manicurists it works with next week, she said. The company launched on iOS and Android in February this year.

Pamper has the benefit of buying the tools and supplies required for these manicures and pedicures in bulk. It could also serve as a way for newer or existing brands to advertise their products, meaning they could likely get more discounted bulk deals. And like other on-demand services, if the demand continues to rise, the company can experiment with surge pricing that other companies use in order to pull supply and demand to a more equal level.

In addition to all that, Pamper has an opportunity to keep up with new style trends and update its options accordingly. Some examples would be tailoring specific styles around holidays like Halloween and Christmas — for this Halloween the company plans to offer Disney villain-inspired styles.

If Pamper takes off, that too offers an opportunity to further build itself as a brand by actually experimenting with new styles that could themselves take off, Xue said. And of course, like many newer business models, venture capital firms are aggressively investing in on-demand startups. Sprig, for example, raised $45 million, while Shyp raised $50 million at around a $250 million valuation.

Pamper launched in 2014 and is based in northern San Jose.