Akosha, a messaging platform that connects customers directly to businesses, has raised a $16 million series B round led by returning investor Sequoia Capital.

The New Delhi-based startup, which counts e-commerce giant Snapdeal and telecom Aircel among its 130 companies that use its services, plans to hire 200 new software engineers and product managers as it expands and improves its technology to handle hundreds of customer chats at a time.

Its series B brings the total Akosha has raised so far to $21.6 million.

Founder Ankur Singla launched Akosha in 2010 after he had a frustrating time trying to reach a representative at a telecom company with a complaint.

“What we wanted to do was create a platform, a single place where you can get in touch with any brand in India,” says Singla. “Many Indians use mobile chat, so we wanted to build it in a way where large brands can log onto a platform, look at customer service issues, and improve customer retention and so on.” 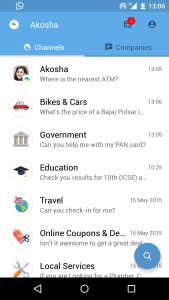 Customers can use Akosha’s website, app, or a telephone number to contact company representatives, and then leave a review about the quality of the service they received. Akosha’s Android app (an iOS version is in the works) has been downloaded by 140,000 users and can also be used to find products, get discounts, and book appointments.

Akosha claims to process 30,000 customer inquiries every day, of which 18,000 are handled through its mobile app. It monetizes with a premium version of its enterprise software, called OneDirect, which currently has about 30 paying customers, and recently opened a new office in Bangalore to handle technology and product development.

Alternatives to Akosha’s services include hotlines set up by individual companies and WhatsApp, which has over 70 million active users (over a tenth of its global user base) in India and is often used by companies to communicate directly with customers.

Unlike other messaging apps like WeChat and Line, which let businesses set up official accounts (but don’t have a significant presence in India), WhatsApp does not have an enterprise version and the Facebook-owned messaging and voice-calling app’s strategy seems to revolve mainly around challenging telecoms, giving startups like Akosha a niche to fill.

“In India, there is nothing similar to WeChat, where you have a lot of commerce happening over WeChat itself,” says Singla. “We are working on improvements that will help us on the B2C side, with a UI that will make it easier for customers to connect with a brand.”