TunnelBear, the company responsible for one of the better looking and easiest to use VPNs, is making its service even more accessible after it introduced an extension for Google’s Chrome browser.

TunnelBear for Chrome is available right now. It will be particularly of interest to fans of services like Netflix and Spotify who don’t live in supported countries. TunnelBear has long been a popular option for Netflix junkies overseas because its free tier gives a generous 500MB allowance — which can be upgraded to 1GB just by tweeting about the service.

Initially, non-paying users of the extension will top out at 750MB, but TunnelBear told TechCrunch it will implement the 1GB offer soon.

Existing customers can use the extension as part of their membership package. For those who own a Chromebook or Linux machine, the extension brings TunnelBear to each platform for the first time. TunnelBear also plans to launch extensions for Firefox, Safari and other browsers. 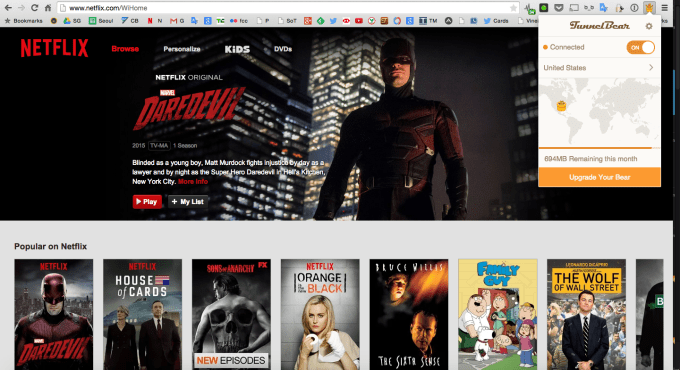 “Our goal is to make [using a VPN] as easy and accessible as possible,” TunnelBear co-founder Ryan Dochuk told TechCrunch in an interview. “The extension is so fast and so easy that you should be using it in your everyday internet activity.”

VPNs are also about providing security for your online activities, the importance of which was underscored by Edward Snowden’s NSA leaks, but this extension is about convenience so there is a trade-off. It includes the same 14 global destinations to ‘tunnel’ to, but the more detailed privacy options — which include TCP override and the option to fully hide your location — are absent.

That’s because the Chrome extension isn’t actually a VPN at all, rather it is an encrypted proxy. It isn’t as secure as the main TunnelBear app — the Chrome extension uses AES 128-bit encryption, the main apps use a stronger AES-256 combination — so it isn’t the answer for keeping your entire machine’s data wholly secure, but it does simplify the processes.

“For people who didn’t feel ready to use a full VPN, we think that this is the easiest option,” Dochuk said.

TunnelBear, which was founded in 2011 and is based in Toronto, said its service is used by more than five million people across 179 countries. The company doesn’t break out its paying customer numbers, however.

I created a free account for the extension and burned through my 750MBs pretty quickly. The strategy with the extension, like the free tier, is to get users to up-sell to a paid membership at that point.