After being incubated in a government lab for seven years, Descartes Labs — a deep-learning image analysis startup — has raised $3.3 million of its own funding and spun off as a private company.

Descartes Labs is focused on taking satellite imagery, turning it into something coherent and analyzing it for useful data. Descartes Labs formally spun out of Los Alamos National Lab in August last year, but now that the company has attracted investor interest, it has a chance to more quickly spin up its operations. That includes hiring people — who are based in San Francisco and Los Alamos — as well as computational power.

“This isn’t typical image recognition. We’re doing physics on this, not looking for dogs and Coke cans,” Descartes Labs CEO Mark Johnson said. “It turns out remote sensing and astrophysics have a lot in common. If I take a lot of pictures in the sky, the sensors need calibrated, and I need to stitch those pictures together, and I need to do massive analysis. Well, if you turn that telescope around toward the Earth, you get a similar set of problems.”

The company is starting with tracking agriculture around the globe. In the U.S., agricultural data is well documented, but internationally it turns out there is very little well-reported information — though, to be sure, the data is there in the satellite imagery. In that sense, it goes from being a bureaucratic problem to a big-data problem that Descartes Labs can attack with machine learning.

The public data that comes down from those satellites also isn’t just in the visible spectrum — it’s in other bands like infrared, which is particularly useful when tracking crops.

For a problem as hefty as what Descartes Labs is trying to solve, you might expect the company to have to pay a lot for powerful computers that can handle those calculations. But the difference in 2015 is the insanely powerful computational processing that previously was only available for massive government projects is available through services like Amazon AWS and Google Cloud Compute Engine. And startups like Descartes Labs can buy it in lieu of building or buying massive supercomputers — on the cheap.

Part of that is due to the efficiency of the machine learning code, and that’s thanks to the expertise of his team — which also includes Mike Warren, a scientist at Los Alamos that ran a trillion-particle simulation of the universe. The rest of the team is staffed with scientists and cosmologists working on the hard science behind image recognition and machine learning.

It’s a good start for building a business in the near future as well. Businesses interested in that agricultural data — commodities traders, for example — have a limited amount of data that they can extrapolate into estimates of worldwide agricultural activity. Getting a better handle on that certainly is more valuable than making ballpark estimates on what sorts of food is being grown, imported and exported. 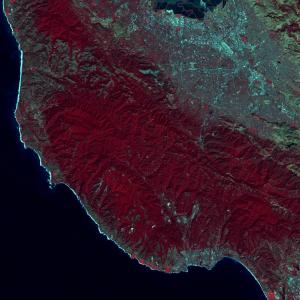 The implications of the technology certainly go beyond that, but the company is starting off there because there isn’t really anything available on that scale. Johnson said the $3.3 million is just enough to get a product out the door and “have a few failures along the way and course correct,” as most startups inevitably do.

“When you invest in a very early stage, part of the opportunity and challenge is trying to figure out the addressable market,” said Venky Harinarayan, an investor in the company and a founder of Kosmix — which was acquired and turned into Walmart Labs. “We don’t want large ma 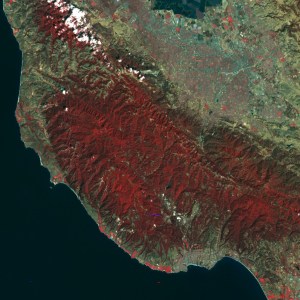 Descartes Labs was incubated in Los Alamos National Lab for seven years before spinning out. But spinning a company out of a government-funded laboratory isn’t necessarily an easy feat. There’s plenty of negotiations that can drag on, and sometimes, the people running those startups are used to being well-funded and don’t know how to run a startup, Eric Chin at Crosslink Capital — an investor in Descartes Labs — said.

Descartes Labs is led by Johnson, formerly the CEO of Zite — which sold to CNN, and then subsequently to Flipboard — and a longtime product head. In fact, many of the investors in the company seemed to have known Johnson for about a decade, following his career from the very beginning as a product manager.

In the short term, it’s about what’s being grown today, but in the long term, it’s about how we are affecting the planet and how we can make sure we can still feed ourselves in 10, 20, or 100 years, so we aren’t doomed. Mark Johnson

“I met him early in his career — when we meet people with the raw material [to become great], someone with the DNA or makings of a super star, we track them, we log them, we follow them,” Chin said. “He is and was on our [radar]. I’d message him every couple months, ‘how’s it going at CNN? how’s it going at Zite?’ He’s a good listener, he takes criticism well, but he also has conviction and he has confidence.”

Beyond agriculture, the imagery available — now and as it continues to pour in — has much broader implications than crops. With both of Johnson’s homes — New Mexico most recently, and California before that — stricken by drought, he was quick to rattle off a number of applications that could help those states manage a crisis like the drought and beyond that.

“We’ve begun to look at snowpack in California, water features — just looking at how things change over time, we discover amazing stuff,” he said. “As we poke around to more and more crops and more and more areas, we’re gonna discover surprising things. It’s not about how much corn is being grown, it’s whether that’s sustainable in the long term. A lot of wheat is in the Ogallala Aquifer, which took hundreds of years to fill, and if we aren’t careful will be drained in the near future. In the short term, it’s about what’s being grown today, but in the long term, it’s about how we are affecting the planet and how we can make sure we can still feed ourselves in 10, 20, 100 years, so we aren’t doomed.”