[Update: Secret has confirmed it will shut down and give investors back their money]

Anonymous sharing app Secret will shut down soon, according to sources close to the company. The announcement could be made as soon as today or tomorrow, and there’s some talk of current employees receiving modest severance packages. Having raised $35 million, it’s unlikely that the company is out of money.

But after a major redesign sterilized the app’s identity and made it look just like its much more popular competitor Yik Yak, and its co-founder Chrys Bader-Wechseler left, Secret may see shutting down as the best outcome. Many employees, including top talent like Sarah Haider, Safeer Jiwan, and Amol Jain have left the company over the past month or so. One source says the company has been whittled down to under 10 employees from over 20 several months ago and has been in “maintenance mode.”

Requests for comment to Secret’s employees and CEO have gone unreturned.

[Update 12:40pm PST: Secret’s CEO David Byttow just announced that “With a heavy heart, I’ve decided to shut down Secret, wind-down the company, and return the remaining money.” This confirms our report.

With a heavy heart, I've decided to shut down Secret, wind-down the company, and return the remaining money. https://t.co/HZUCMe3xFu

In the farewell post where he mentions 15 million people used Secret, Byttow explains that “Secret does not represent the vision I had when starting the company, so I believe it’s the right decision for myself, our investors and our team.” As for criticism about cyberbullying, Byttow writes “I believe in honest, open communication and creative expression, and anonymity is a great device to achieve it. But it’s also the ultimate double-edged sword, which must be wielded with great respect and care.”] 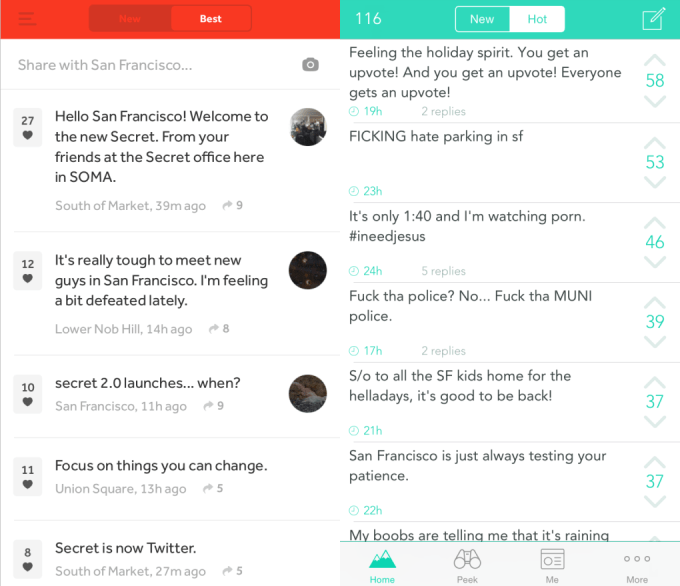 Secret’s app lets you post short snippets of text, like confessions or rumors. The posts are “anonymish” in that your name doesn’t appear, but other details like your general location might. The startup garnered tons of press when it launched in early 2014. Along with Whisper and Yik Yak, it was part of a wave of interest in anonymous apps. It rode the hype to massive funding, which allowed the two founders, David Byttow and Bader-Wechseler to each take $3 million off the table. They essentially traded stock for cash, putting money in their pockets though the business wasn’t earning any.

Unfortunately, Secret’s slow response to criticisms that it facilitated cyberbullying gave it a rotten reputation with some. At SXSW 2014, I did a fireside chat with Byttow that you can watch below, where I hammered him about the potential risk of cyberbullying on Secret. He seemed incredulous, and I’m not sure he ever took it seriously enough.

After a year of slow growth, it ditched its highly visual design and background photos in favor of a minimalist text-only design that made it seem like a clone of Yik Yak. While it’s experimented with hyper-local backchannels for events like Sundance and CES, one source says the numbers weren’t growing.

Last month, TechCrunch’s Ingrid Lunden spoke to Byttow, who denied reports that Secret was shutting down or pivoting into becoming an app studio. He cited strong usage by the youth during spring break as a vote of confidence. 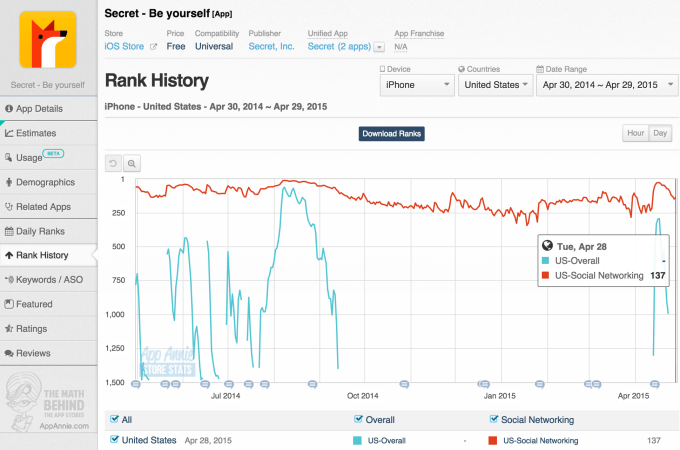 But according to App Annie, that spike of interest was short-lived, and Secret has since fallen back off the top 1,000 overall US apps chart since.

Shutting down and handing the money back to investors could keep Secret from going down in Silicon Valley history as a $35 million disaster.