Contextly, the startup founded by former Wired editor Ryan Singel, is giving readers an easy way to stay up-to-date on the news that interests them.

Specifically, the company has launched a new Follow This Story button that publishers can add to their stories. If a reader hits the button and enters their email address, Contextly will send them follow-up stories. It will also present them with a Backstory — namely, a timeline of older stories that provide context for the current news.

From the editor and writer’s perspective, there’s no extra work. Contextly looks at things like the article’s tags and words in the body text to determine which stories are related algorithmically.

The focus, Singel said, is on hard, breaking news. If you’re talking about, say, a list of the 11 best Bánh mi restaurants in Brooklyn, “What’s the follow up to that? Eleven Bánh mi restaurants? Next year’s version?” Here’s the basic test: Contextly publishers can only include a Follow This Story button when there’s actually enough content to create that aforementioned timeline. 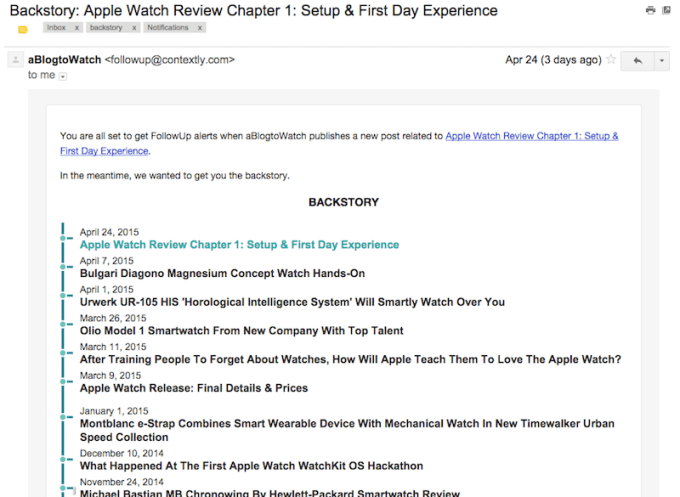 Granted, there are plenty of aggregators and apps that let you see the latest stories on a given topic already, but even so, stuff can slip through the cracks. Heck, even at TechCrunch, where it’s our job to keep track of tech news, we sometimes have to fill each other in on stories we missed.

“Our goal is to build stuff that helps publishers build loyal audiences,” Singel added. “This comes out of … my own frustration. To be able to follow a story, I don’t want to have to go back to whatever site every day to look for the new version of it.”

Plus, the data could help news organizations shape their coverage. Imagine if one story got a crazy amount of pageviews but no one signed up to follow it, while another got mediocre traffic but many follows. It might make sense to pursue the latter story, Singel argued, because those followers are “probably your core audience.”

Oh, and publishers can use Contextly’s follow button separate from its other services.