It’s not polite to call someone out of the blue anymore. Best to text them first. That’s why Facebook thinks video calling will live naturally inside Messenger. Today, Messenger is launching free VOIP video calling over cellular and wifi connections on iOS and Android in the U.S., Canada, UK, and 15 other countries.

Facebook’s goal is to connect people face to face no matter where they are or what mobile connection they have. With Messenger, someone on a new iPhone with strong LTE in San Francisco could video chat with someone on a low-end Android with a few bars of 3G in Nigeria.

Facebook first introduced desktop video calling in partnership with Skype in 2011, but eventually built its own video call infrastructure. Bringing it to mobile could Messenger a serious competitor to iOS-only FaceTime, clunky Skype, and less-ubiquitous Google Hangouts.

Messenger has no plans to charge for audio or video calling. Instead, it knows more messaging drives lock in with Facebook’s News Feed where it makes tons of money from ads. Facebook Messenger’s Head Of Product Stan Chudnovsky who led the video calling feature tells me, “Whatever’s good for Messenger is good for Facebook as a company.” 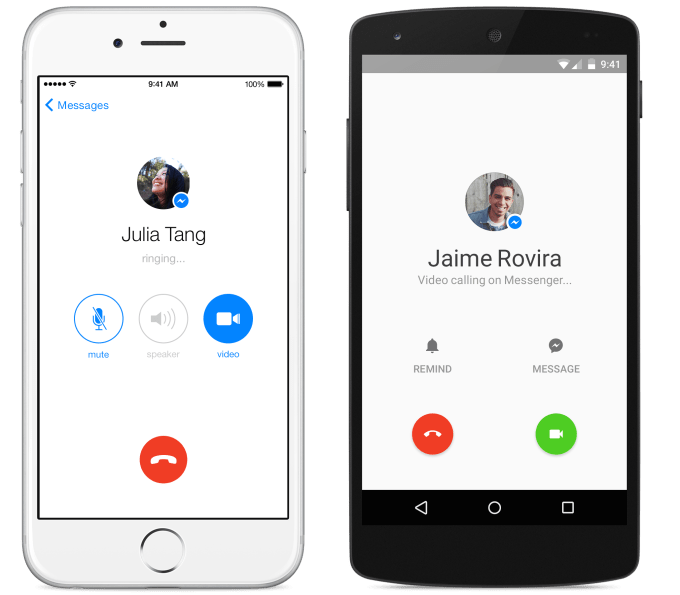 If you have access, you’ll see the video camera icon in the top right corner when you’re having a Messenger chat with a friend who can be called. Tapping it starts a video call, which opens when the recipient accepts. Cameras start in selfie mode but you can toggle to the backside camera to show a friend what you’re doing.

Messenger will adjust the quality of the call according to your connection. The demo I saw showed just a hint of pixelation and strong frame rate with 2 bars of LTE service in SF. It’s easy to switch to just VOIP audio, and Facebook will gracefully notify you if the connection weakens to where video won’t work. It’s all free on Facebook’s side, and users will only be charged for data use by their mobile operator, which they can avoid by using Wi-Fi.

One smart thing Messenger allows is for one person to turn off their video feed to make the other person’s high quality. This way if you’re sitting at home and a friend is on a mountain in Norway, you can give them the extra bandwidth because what matters is seeing their scenery, not them seeing your bedroom.

This is v1, though, and Chudnovsky said the Messenger team was working on a bunch of secondary features I asked about, including group video calling and video stabilization. “Group video calling is definitely a use case that a lot of our people might be interested in at some point…[and] it would be a big deal if the whole [shakes hand to simulate lack of video stabilization] thing goes away.” Those could help Messenger compete with Google’s Hangouts, which is filled with bells and whistles.

A big question raised by the launch is whether this could pave the way for Facebook to enter the mobile livestreaming market, where Meerkat and Twitter’s Periscope are making waves. “We’re building infrastructure that will allow us to do anything we want with video” Chudnovsky explains. Still he wouldn’t say if Facebook’s moving in the livestreaming direction. “We’re not thinking about what our second, third, fourth, and fifth steps will. We’re goingto look at the data and decide what we need to do. there’s are 20 different ways we can take it.”

Perhaps the most glaring omission for now is that mobile Messenger users can’t video call with desktop Facebook users, but Chudnovsky says that should be patched relatively soon. On mobile, he thinks video calling in Messenger will be much more convenient than having to either video call someone suddenly, or switch apps. “You don’t have to close it, go to another app, launch that app, connect with them in that other app, and then finally starting the call with brain damage from how you’re actually doing it.”

Chudnovsky knew Facebook needed to build mobile video calling after doing feedback sessions about Messenger’s audio calling feature. “Unprompted, a lot of people said ‘we’d like to have a face-to-face conversation over Messenger” he tells me.

Building video into a chat app means these conversations can be emergent, spontaneous experiences, rather than scheduled occurrences. “Everything starts from a text conversation these days” Chudnovsky explains. “I’m not going to call you any more. I’m going to text you and ask if you have three minutes for a phone call.” Instead they can text in Messenger, and switch to video with one tap. 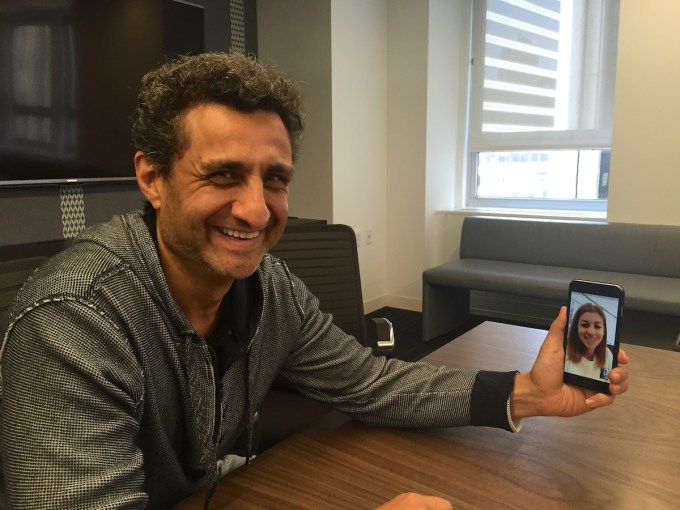 This will also let Facebook promote Messenger video calling without being too annoying. For example, Chudnovsky imagines two people Messenger text chatting for hours, one in a hotel room in NY, another in a room in Paris, both on Wi-Fi. Messenger could notify them that they could turn their chat into a video call for free. It will let them go out and find the feature if they’re on on a cellular connection, but will remind them they could have a more vivid connection for free when possible.

This is all part of Facebook’s philosophy that its products have to be good enough to grow without massive cross-promotional help. It’s often let products like Facebook Deals or Home die rather than pester its nearly one and a half billion people to use them. “It’s survival of the fittest inside the company. Only products and features people actually want survive and that’s how the product keeps getting better and better” Chudnovsky reveals. Hocking something that doesn’t work? “That’s not our mojo”, he says. 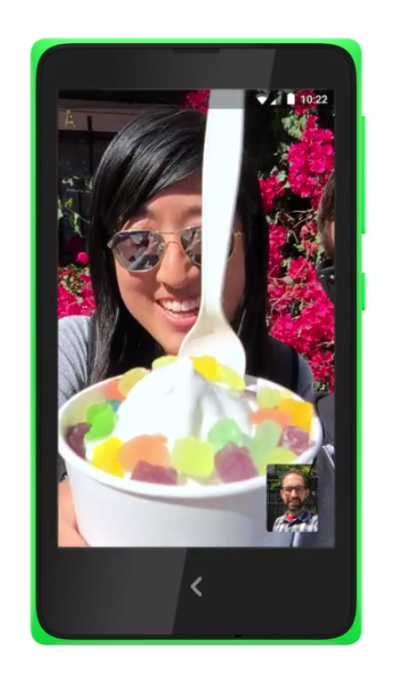 Protecting people from their own data usage will be important for the feature. Though Facebook offers a way to disable auto-play of News Feed videos when you’re not on Wi-Fi to save people’s data plans, some users who didn’t still felt burned when they saw their bills.

The Messenger team has done extensive work to try to crunch the data needed for video calling as small as possible. When I asked how Messenger compares to Skype or Hangouts’ data usage, Chudnovsky wouldn’t be specific but said “We’ve been doing a lot of benchmarking and we’re very happy. Very happy.”

Overall, Messenger’s voice and video quality were strong despite an imperfect mobile connection. And since everyone you know is probably already on Facebook and connected to you, and you can easily find new contacts there, Messenger could take the hassle out of simulating a face-to-face conversation. Chudnovsky concludes, “This is what Facebook is supped to be doing, which is removing friction from everything.”