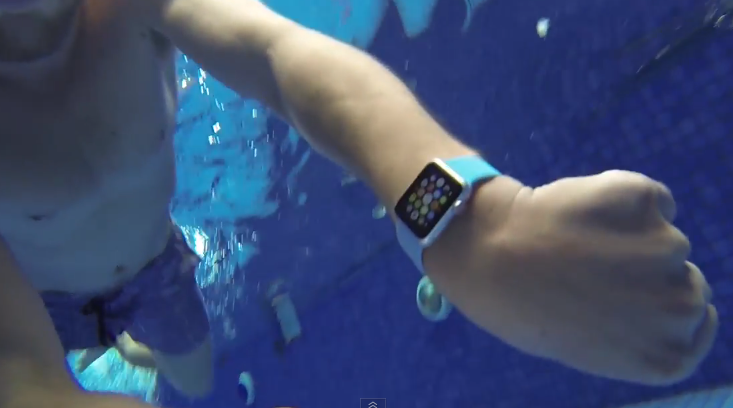 It’s a hot day. You jump into a swimsuit, hop into the pool, and… suddenly remember that your Apple Watch is still on your wrist.

In an early user test, at least, it seems the Apple Watch is pretty darn water resistant. The guys over at FoneFox tossed a Sport edition watch into the shallow end of a pool — and after 15 minutes, it was still tickin’ away. They were even able to get the device to kinda-sorta work under water, though capacitive touch screens tend to freak out and do whatever they want when submerged.

Note: the video has a shirtless dude soaping up in a shower, which might look a bit weird to your boss/colleagues if you’re at work.

Does this mean you should go swimming with it on the regular? Nope.

You’ll note that Apple doesn’t play up water resistance in their marketing very much — the only mentions of it anywhere on Apple.com are in footnotes buried deep at the bottom of a spec list.

And that’s for good reason: while it’s “water resistant”, it’s hardly water proof. The Apple Watch’s water resistance is rated at IPX7, which means that it should survive occasional dips up as deep as 1M (3.2 feet) for 30 minutes. Take it deeper than that, or for longer periods of time, though, and you’re tempting fate. Given that most pool time fun takes you deeper than 3 ft, it’s best to keep it keep it somewhere dry.

But as someone who once had an iPhone bite the dust in his shirt pocket after a light rain, it’s comforting to know that the Apple Watch is a bit more forgiving.