Well, it had to happen, if it didn’t already. Two-person indie game developer Nerd Agency has unleashed the ‘high score selfie’.

The feature, which can be seen in the startup’s latest iOS game, Boom Bunny, lets you take a photo of yourself with your high score superimposed and — you guessed it — share it on social media.

“We were seeing people who’ve played our games sharing their high scores on Twitter and Facebook, and some of them were really funny,” explains Nerd Agency co-founder Jack Cooney.

“People were really proud or devastated at how they’d done, and expressing that in really fun and unique ways. Not just in terms of colourful language, but in gifs and pictures too. So we saw that and just thought ‘taking a selfie would be pretty funny too'”. 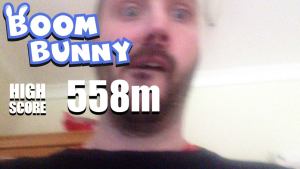 And so, for better or for worse, the ‘high score selfie’ was born. The feature, Cooney says, was “more difficult to code than we thought, but we got there, and it works!”

“I think by giving people that option to use the camera, it gives them a chance to have some fun just playing around with it and create some pretty unique and weird shit to express themselves further. All in all though, we just thought it could be pretty funny,” he adds.

In addition to Boom Bunny, Cooney and his co-founder Rheo Violenes’ other titles include Hop Hop Ninja!. The pair claim to have garnered around 1.2 million downloads collectively.

Quintessential indie developers, Cooney is based in the U.K. and Violenes in Denmark. “We’re two guys making games from our bedrooms and working together via Skype,” he says.

“We’re gamers making games for gamers, so we really enjoy doing what we do and to be honest we’re pretty nerdy. A great thing about making games is that we get to focus on making everything as fun as possible, and we’re applying that to everything we’re working on, including more mobile games, Oculus Rift and some extra stuff too.”