It also has several features more commonly seen in messaging apps, like the ability to share your location, photos and videos from your camera roll, sketch tools (so you can draw on photos or a plan background before sending them), and stickers. As with Skype, Wavee lets users send each other files and text messages while on a voice call. 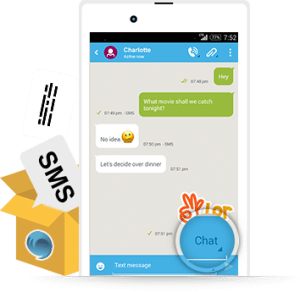 Users of Wavee’s Android app can also chose to send their SMS messages directly to Wavee’s inbox, which is an extra layer of convenience that might entice users who are tired of toggling between different apps.

As with any new social or messaging app, however, Wavee not only faces the problem of getting new users, but helping those people convince their friends to download and use Wavee, too. In an effort to help things along, Singtel will not charge its 500 millionSingaporean subscribers local data fees for Wavee until July 9. The app also plans to add calls from Wavee to local mobile or landline numbers in the second half of this year.

Wavee requires a mobile phone number to sign up, which makes it easier to invite other people to the service (and for Singtel to track who is using the app), but will be a turn off for people who are concerned about their privacy. This may make it harder to win over Skype users, since they don’t need to connect a phone number to use its apps.

Singtel, however, claims that Wavee will offer better quality connections than other apps, at least for users on its telecom network, because it can detect the strength of the network voice calls are being made on and then optimize the call so it doesn’t get dropped. It says it will offer this feature for video calls soon.

One thing telecom observers will be tracking is whether or not the launch of Wavee will change Singtel’s approach to Skype, WhatsApp, and other similar services. Last year, the Singtel’s chief executive Chua Sock Koong reportedly said that companies like hers should be allowed to partner with companies like Skype and Whatsapp in order to “create sustainable revenue models,” which many people interpreted as meaning Singtel would charge extra fees to WhatsApp and Skype users.

In a statement issued afterward, however, Singtel said that it would not levy separate charges for third-party services. Indeed, the telecom has plans like the WhatsApp Pass, which gives subscribers unlimited access to the app without extra data charges.

TechCrunch has contacted Singtel about the future of WhatsApp Pass and will update this post when we hear back from them.

With its rapidly increasing mobile penetration rates, Southeast Asia is an important growth market for services like WhatsApp, but its position there is far from secure due to rivals like Line. If Wavee manages to take off, it throws another challenger into the messaging/calling app wars.