Fabrice Grinda Contributor
Fabrice Grinda is an Internet entrepreneur, angel investor, and co-founder of OLX, one of the largest free classifieds sites in the world.
More posts by this contributor

Editor’s Note: Fabrice Grinda is an Internet entrepreneur, angel investor, and co-founder of OLX, one of the largest free classifieds sites in the world. This piece is excerpted from a larger report due to be posted on Grinda’s site, Musings of an Entrepreneur.

As the first quarter of 2015 draws to a close, it’s clear that the venture capital industry is evolving.

Since 2005, thousands of new millionaires have been minted by the IPOs of Alibaba Group, Lending Club, Go Pro, Box, Zendesk, Facebook, Pandora, Zynga, Linkedin, Homeaway, Zipcar and countless others.

Many of those have become angel investors, a path facilitated by the emergence of Angel List and Funders Club.

Incubators are also proliferating and investing more than ever before: Techstars, 500 Startups and many others have appeared on the scene and Y Combinator classes are bigger than ever. The spring 2015 Y Combinator class has well over 100 startups! Even the emergence of Kickstarter and other crowdfunding startups is tilting the tables in favor of entrepreneurs.

It is surreal to observe investors with no technology experience commit millions in startups after a 2 minute pitch at Y Combinator demo days.

The number of startups and entrepreneurs is also proliferating.The clearest and scariest sign of this bubbliness is seeing investment bankers, management consultants and others, who never normally consider entrepreneurship, join or create startups. This is typically a clear sign that we may be nearing the peak of the investment cycle.

The amount of seed stage capital available has increased more than the amount of startups pushing up valuations, especially for those that somehow become hot (which at the seed stage is not always correlated with actual traction).

This is reflected in the type of deals, we are seeing as angel investors at the seed stage.

I am glad that uncapped notes that peaked in 2013 seem to be mostly on their way out. They were the reason we only made 20 investments in 2013 vs. 41 in 2014. However, valuations of seed stage startups with limited traction out of Y Combinator have dramatically increased to $8-12 million.

It is surreal to observe investors with no technology experience commit millions in startups after a 2 minute pitch at Y Combinator demo days. The YC demo day non-withstanding, we are not in a bubble yet.

Having lived through the bubble, I remember clearly companies with no revenues going public and being worth billions, if not tens of billions of dollars. Today’s top companies like Uber and Airbnb may appear expensive, but they have billions in revenues, are growing extremely rapidly (they are some of the fastest growing companies in history from a revenue perspective) and have real business models.

As global interest rates are at record lows, people are yield chasing. As the tech sector is one of the engines of growth and wealth creation it’s experiencing what Henry Blodget defines as a boom. 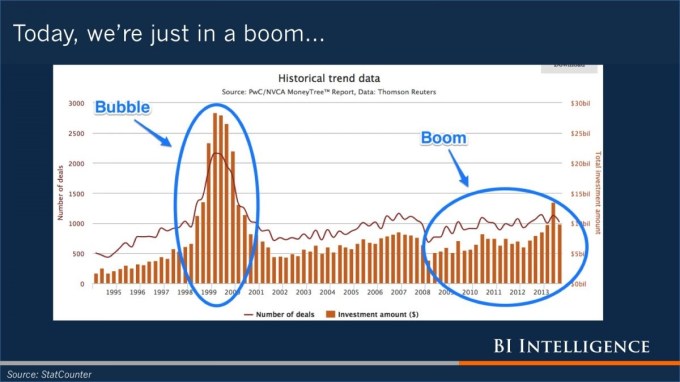 Despite Frothiness At The Earliest Stages, Later Stage Opportunities Abound

While there has been seed stage inflation, it only appears ridiculous for YC companies. The valuation of seed stage companies out of Techstars, 500 Startups or entrepreneur-led are more reasonable, albeit significantly higher than 5-10 years ago.

This is by no means a criticism of YC. They select amazing entrepreneurs who build amazing companies many of which we end up backing either out of YC or at later stages – especially if they are in categories where we feel we can bring a lot of value.

We are not in a bubble yet.

At the same time venture firms are moving to later stages. Many of the firms that used to raise $100-400 million funds to write $4-8 million Series A checks have now raised $500+ million funds and sometimes $1+ billion funds. They are realizing that they need to invest larger checks, pushing them naturally to later stages.

This is creating lots of competition for later stage deals and allowing breakout seed companies to bypass the traditional Series A completely and raise large rounds at what used to be Series B valuations. However, many companies that do well, but not extraordinarily well have a hard time raising Series A money given that you have many more seed fund startups chasing fewer Series A dollars.

Large seed extensions have now become common as well as Series A rounds led by lesser known firms. Rather than investing in a team and product with no traction in a note with a $10-12 million cap, we now often wait 6-12 months for the company to be doing $150 – $500k / month in gross sales and join the seed extension or series A which ends up being priced at $12-20 million – a small premium we are more than happy to pay given that the business is now more proven.

We will also pay up for breakout companies. We remain unit-economics driven and price sensitive, but will bend that price sensitivity rule if the company is growing by leaps and bounds and we can reasonably expect it to grow into its valuation – especially with the capital that it is raising.

Companies used to go public once they were worth a few hundred million dollars.

According to the NVCA, the average time for a venture-backed company to IPO has gone from 3.1 years in 2000 to 7.4 years in 2013. The very best companies like Uber and Airbnb are raising money at tens of billions of dollars in valuation to stay private longer. If anything the companies that are going public at $1 billion valuations like Box seem to be the ones that have no financing alternatives.

As a result there are more private companies worth $1 billion or more than ever before. 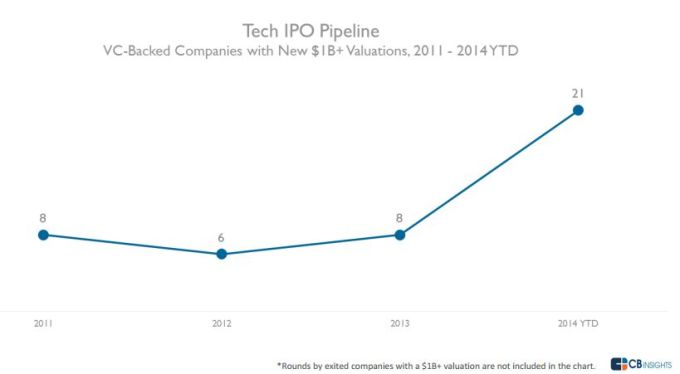 This makes eminent sense. The explicit and implicit costs of going public have increased dramatically. As an Internet entrepreneur I used to dream of taking my company public. No longer!

At the same time, the cost of staying private longer have decreased dramatically:

Historically the arrival of non-traditional actors has been the harbinger that we are near the peak of a bubble. However, this time may actually be different. Public market actors feel they must enter the private market because the value that used to accrue to public investors (e.g.; Microsoft’s increase in value from $500 million to $336 billion) is now accruing to private investors. Public investors in Facebook only saw a 2.2x return from $100 billion to $220 billion. Private investors at every stage got the vast majority of the upside.

Unless there are major changes in the rules for going public, this trend seems here to stay. 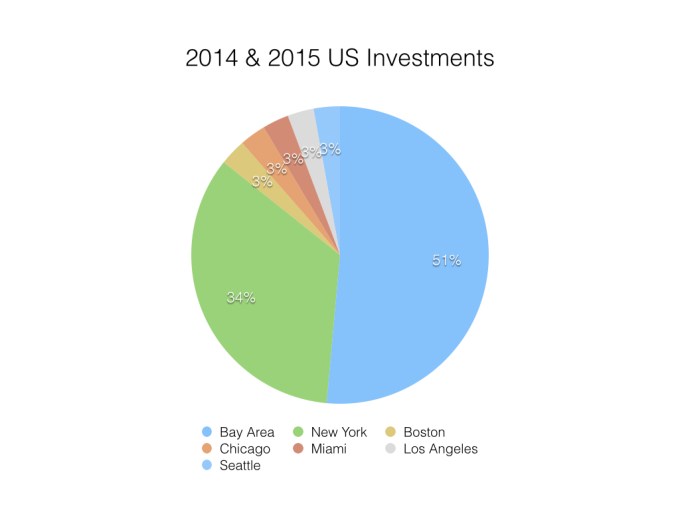 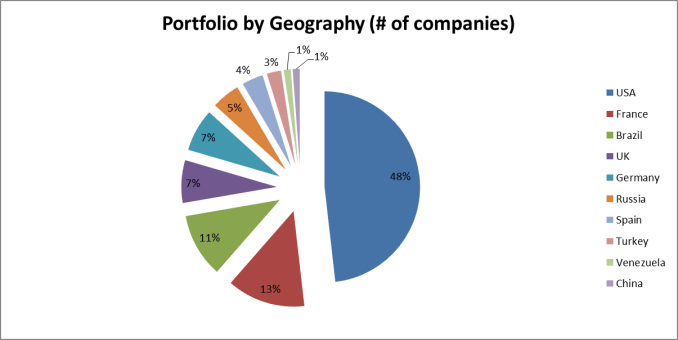 However in 2014, 70% of our investments were in the US. We were only reasonably active in Germany (15% of the investments) and merely opportunistic in other countries. 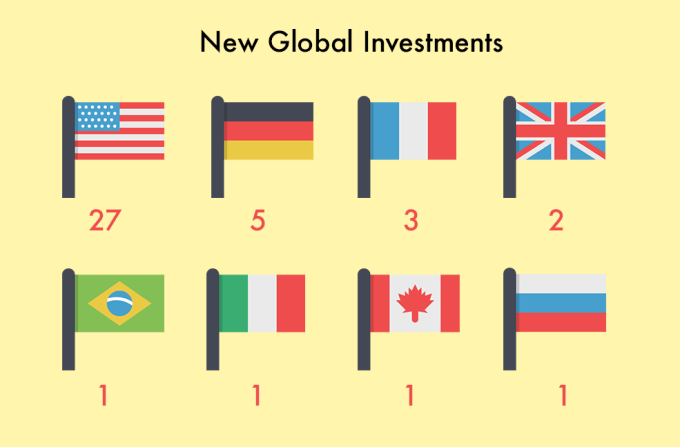 This change was very deliberate. We observed the economic and political mistakes that various countries were making and decided to lower our involvement there:

By contrast, the US has once again become the engine of the world economy. The US has benefited from decreases in manufacturing costs brought about by the fracking and shale oil revolution, productivity increases driven by the technology sector, and increases in spending by corporations and households as their balance sheets have been repaired,

The US startup ecosystem is more robust than ever.

An Internet ecosystem has the following components:

The US already benefited from the strength of the fully fledged Silicon Valley Internet ecosystem. Capital is available for companies of every size and exits happen at every point in the life of a company.

In most countries there are entrepreneurs and angels, but a real lack of Series A & B capital. American investors find you again once you cross $100 million in value, but getting the capital to get there is difficult. At the same time, exits are often limited to companies that become large enough that they attract American acquirers or can go public. By definition this only happens to a small subset of startups.

Only Beijing and Berlin have reasonably robust ecosystems outside of the US. It’s also why we focused our investments in Germany and large markets like Brazil where the domestic markets are large enough that the companies can reach $100+ million in value.

In addition to the macro-economic tailwinds pushing the US, the recent evolution of the Internet market has made the American startup ecosystem more robust than ever before: