Facebook has made some breakthroughs in artificial intelligence. Today at its F8 conference, CTO Mike Schroepfer described new systems for identifying the content and context of videos and sentences.

The second day of F8 included the open-sourcing of native mobile app development tool React Native, a preview of a giant new unmanned aerial vehicle for delivering Internet to remote areas called Aquila, and Oculus’ Michael Abrash described how advancements in haptics will be necessary for the future of VR while showing off optical illusions.

Yesterday, we saw the unveiling of the new Messenger Platform for content creation apps and chat with businesses, confirming my scoop from last week.

Who Wants To See This?

The video AI prototype can not only identify 487 different types of sports, but recognize tiny differences between activities like ice skating vs hockey. In the video below, you can see that Facebook shows confidence levels for how sure it is that it’s correctly identifying a sport.

Another AI can read sentences and determine things like who possesses what, or where is an object. 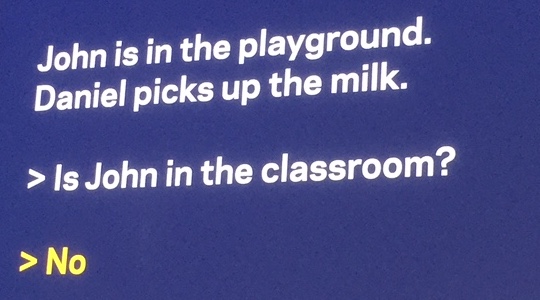 In this video, you can see an AI understanding the content of lines from Lord Of The Rings without any prior knowledge of the fantasy novels or their characters. It’s able to answer questions about the story thanks to Facebook’s Memory Network, which Facebook says “enables a machine to perform relatively sophisticated question answering”.

Facebook has started pouring money into artificial intelligence and language technology. Last year it hired one of the top deep learning researchers Yann LeCun to start a whole AI lab at NYU.

In early 2015, Facebook acquired voice command startup Wit.AI to build out its Language Technology Group. Soon after, it announced it would begin experimenting with a voice transcription feature on Messenger where users can record audio messages as normal, but they can be transcribed so the recipient can read them as text. Facebook’s also previously worked on a translation system that automatically shows posts or comments by people who speak another language in the viewer’s native tongue.

Because understanding the meaning of content makes it much easier to route that content to the relevant audience. If it knows you love football and hate baseball, the ability to recognize which sport is in a video means it can only show you clips you care about.

As a cheeky example, Facebook put up a graph showing how the volume of cat videos uploaded to the Internet is on the rise, but we don’t spend more hours awake per day. Knowing which of those videos are the best and most relevant lets Facebook cut through the information overload. 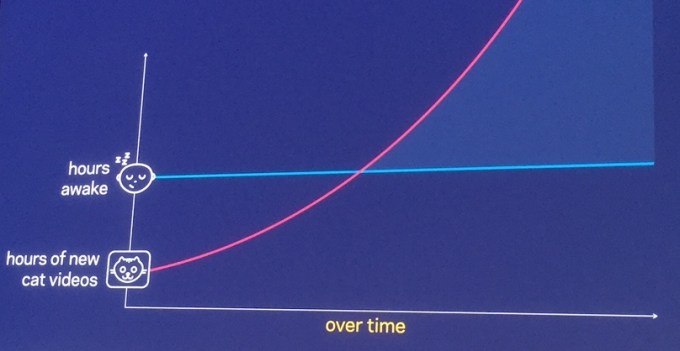