A couple of things about online learning service Platzi immediately set it apart from the other companies in Y Combinator’s latest batch. First, it is from Latin America — Colombia to be precise. Second, it is profitable. That’s right, it’s already making money.

Online learning is hardly a new concept, but two-year-old Platzi is taking a different approach that’s interesting for a couple of reasons.

Rather than broadening the availability of the traditional education experience using the Internet, like most MOOC (massive open online course) services, it’s focused on developing tangible skills.

It does lean on tradition, however, by replicating the classroom experience with live video classes. They also include a stream of notes from students, which are later gathered together to provide an overview of each session. Classes typically get 1,000-3,000 attendees, but those who miss out can replay the video, which shows the class notes being taken in real time. 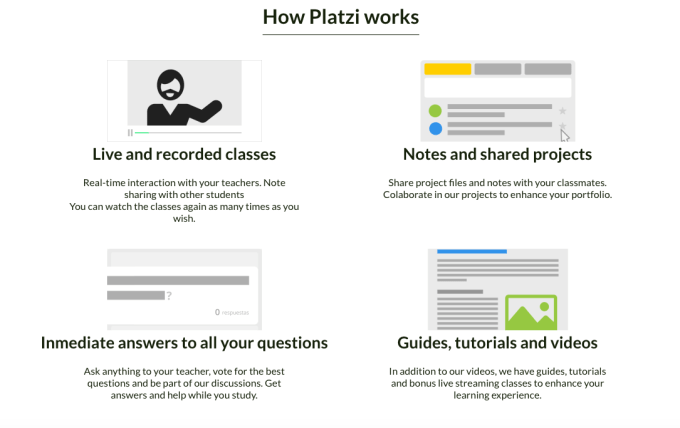 The service began in Latin America with Spanish content when two entrepreneurs, Colombian Freddy Vega and Guatemalan Christian Van Der Henst, got together. Today, Platzi has 80,000 registered users worldwide, and this year it introduced its first English classes.

CEO Vega told TechCrunch in an interview that the service has a 70 percent student completion rate; that’s quite astonishing since most MOOCs see just 10-20 percent of their registered users sees their courses through in their entirety.

So, how is it Platzi getting this level of engagement? In a nutshell, it is about skills and development, not education.

“Today, people upgrade themselves constantly to update their knowledge. They’re no longer looking for academic knowledge; they want real experience,” Vega said. “People are hired for their portfolios and projects. That’s why we focus on the design, marketing and programming disciplines that are not well served by current online learning services.” 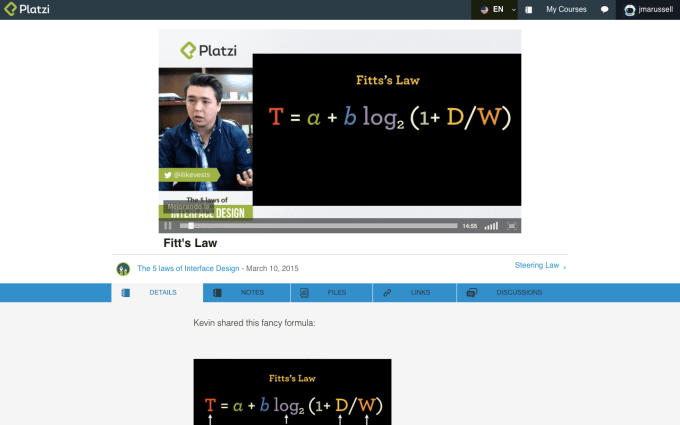 Starting a company away from Silicon Valley makes raising capital challenging. That was the case for Platzi. Vega admitted that there is no culture of raising capital for tech startups in Colombia, which shaped the business objectives from the beginning.

“We assumed we could never raise and made the company profitable… when we arrived here [at Y Combinator], we discovered that it is the exception instead of the rule,” he joked.

With tens of thousands of users worldwide, and $2.7 million in revenue to date — Platzi is doing $125,000 in revenue per month — some have asked Vega why enter Y Combinator in the first place. The question seems particularly relevant since the company isn’t looking to raise funding — something that seems hard to believe given YC’s extensive network within the U.S. VC scene.

But Vega said it isn’t about money. It’s more strategic.

“YC is the perfect gateway to get into Silicon Valley and kickstart our English service,” he explained. “We want to get connected to talent, we still have healthy savings and will reinvest most of it to keep our growth.”

The thinking behind the U.S. expansion is also well-explained on Platzi’s blog:

There is no need to be in Silicon Valley to create a great company. But here live the most important inventors of technology. Our mission is to connect those people who are creating the future of the Internet to you.

Platzi has a team of 20 across Bogota, Colombia, and Mexico. Its U.S. contingent currently numbers four, but there are plans to bring on more hires to boost the content creation and marketing efforts behind its English service, which is currently available without charge to encourage adoption. With the Spanish service fairly established, Platzi is making a push on English to boost its presence in the U.S., Europe and other parts of the world where it has seen promising uptake.

“Our popularity in Europe came by default when we added English, so we stopped prioritizing [a local approach] so much — we want to grow as much as we can in English,” Vega said.