Startup accelerators have become a prominent feature of the tech landscape in recent years, with more and more programs popping up every month.

In many ways, they have become a rite of passage for thousands of entrepreneurs who apply to and join programs annually.

Yet, with so many programs to choose from, and little publicly available data on each program, it can be hard for entrepreneurs to figure out which programs are most effective and which specific program would be the best fit to help launch their startup. We founded the Seed Accelerator Rankings Project with this challenge for entrepreneurs in mind.

Competition for the top 20 spots this year was fierce. With so many new programs coming into their own, and the addition of eligibility for non-equity-taking programs and programs with specific affiliation requirements (such as university-affiliated programs), the pool for this year’s ranking has grown considerably.

Our aim is both to foster conversation about the accelerator model that has emerged over the last decade, and help entrepreneurs gain a measure of visibility into the strengths of various programs.

The project is an outgrowth of the original accelerator rankings study conducted by Aziz Gilani, Kelly Quann and Yael Hochberg in 2010.

Today, at SXSW, we released the latest version of our annual rankings.

Overall, we found many interesting new programs that were simply too young to have reliable outcomes, and that were therefore not included in this year’s rankings. However, we expect to see some of these programs in top categories in years to come.

In determining who qualified for the rankings, we considered all programs that met the formal definition of an accelerator program: fixed-term, cohort-based, with educational and mentorship components, culminating in a public pitch or demo day.

Additionally, programs had to have graduated at least one cohort, have at least 10 graduates, be primarily located in the U.S., and be willing to provide full transparency to our team. Of course, there are some programs out there that call themselves accelerators who do not meet these criteria, and therefore did not qualify for this rankings project. Ultimately, we verified and invited over 150 programs to participate in the rankings process.

To construct the rankings, we collected detailed data on a large number of accelerator programs and their graduates including confidential data provided by the accelerators themselves.

We then calculated a variety of quantitative measures to better understand how programs stacked up on several important outcomes, including: valuations, fundraising, exits and survival. We supplemented those measures with a broad survey of each accelerator’s graduates, in order to determine their satisfaction with the program and whether they would recommend it to fellow entrepreneurs.

Nearly 1000 accelerator program alumni shared information about their startup’s experience with us.

Here are the top 20, based on our criteria:

This year, the list is topped by a new champion: Angelpad (last year’s #3 program). Mucker Lab (#4 last year) and Techstars (last year’s #2) took second and third respectively. Angelpad’s rise to the top is rooted in extremely high satisfaction of its graduates, high valuations for its portfolio companies and fundraising success.

Mucker Lab similarly distinguished itself with high alumni satisfaction and fundraising numbers, while Techstars is particularly successful in the valuations and firm survival categories, with a strong alumni network also in play for its graduates. The University of Chicago New Venture Challenge, in its first year of participation, slots into fourth place on the strength of a number of strong exits, including the $2B Grubhub IPO and Braintree acquisition. 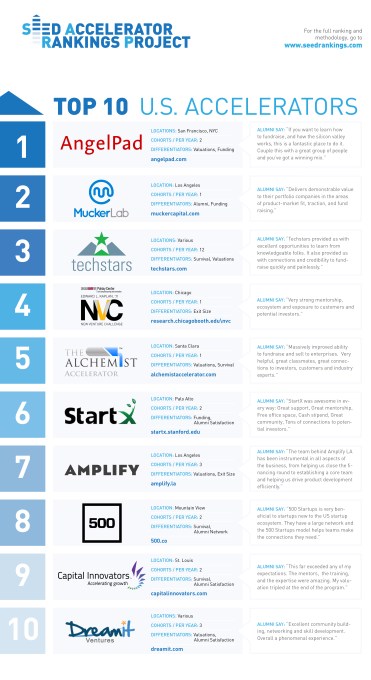 Notably absent in this year’s list are Y Combinator and RockHealth–both programs now classify themselves as seed funds rather than accelerators, and asked us to respect their evolution into a new model. This, of course, is not a statement about efficacy of those programs – based on the 2013 data submitted to the rankings team, Y Combinator would still have topped the list if they had not transitioned models.

To make sure we are comparing apples to apples, we measure one, two and three years after graduation, and we adjust for differences in the stage companies are at when they enter the accelerator, such as whether they have come in having already raised a round of two of financing or with positive revenue, versus entering as a brand new company.

Overall, the startups that have graduated from the accelerators in our top 10 have a current total valuation slightly under $4.4 billion. Roughly 3.5% of the companies that have gone through an accelerator in the top 10 have exited successfully, a number that is low, but not necessarily surprising given how new the phenomenon is relative to the typical number of years it takes for a seed stage startup to reach a successful exit.

Another 35.6% of the companies raised a significant round of financing within a year of graduating from a program, with an average raise of $1.5 million. Also, it is remarkably clear is that for the top programs, there is near universal satisfaction from the startups’ perspectives.

For example, in the top 10 programs, 96% of the startups said that knowing what they know now, they would repeat the experience.

Competition for the top 20 spots this year was fierce. With so many new programs coming into their own, and the addition of eligibility for non-equity-taking programs and programs with specific affiliation requirements (such as university-affiliated programs), the pool for this year’s ranking has grown considerably. Given this, snagging a spot anywhere in the top 20 is a sign of distinction.